Made this for breakfast this morning, and it was one of the best guilt-free, sweet apple dishes I’ve ever had. My inspiration came from this recipe from Fat-free Vegan Kitchen. I modified it a little though and this is what it turned out to be:

Core apple but leave about 1/8” at the bottom to hold in juices, and trim off some peel around the opening. Put raisins in a small (microwave-safe) bowl with 1 tbsp. of water and microwave for 1 minute. Add rolled oats and half of the cinnamon to the raisin/water mix, stir and place in the center of the apple. Drizzle maple syrup around opening and over the entire apple and sprinkle with some more cinnamon.

Microwave for 3-6 minutes, or until the apple is thoroughly tender. Let sit for 3-5 minutes to cool a little (it won’t cool much). Then cut open and enjoy! 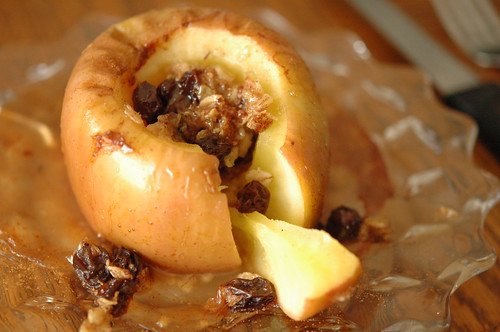