I’m finally getting around to doing a review on the Urban Food Crawl that I experienced on the 3rd of September, I’ve been procrastinating on writing it up just because of the sheer quantity of things that I wanted to talk about! Let me start off by saying that this ended up being an incredibly fun endeavor, and I also want to thank Jen and Sheri for putting together an awesome tour. So, thank you ladies! 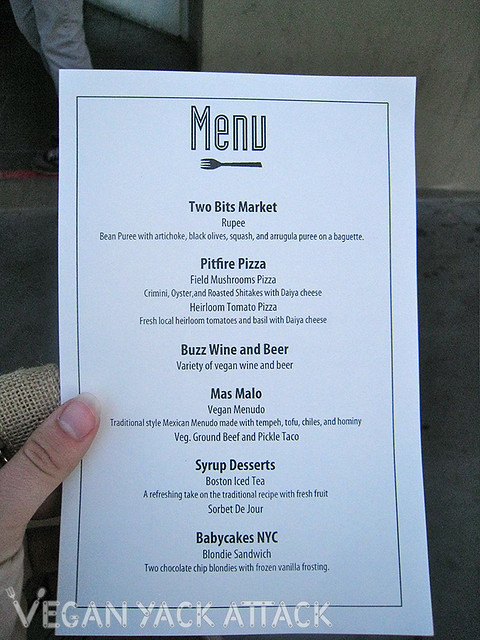 Above is the menu/itinerary for our tour. They don’t usually have the beer and wine tasting most weeks, but the weekend of the 3rd they subbed one of their usually food stops with going to Buzz and it ended up being amazing (but I’ll go over that later ;]) First we met up at Pershing Square and had a group of 10 people, including the tour guides, most of who were not vegan oddly enough! I like to call these people vegan enthusiasts, and it’s fun meeting them because they sort of bridge the gap between vegans and omnivores.

This is a walking tour, so we headed off to Two Bits Market for our first food stop. The owner and his wife were there to tell us a little about their market, and their sandwiches which they make fresh to order. They were super nice, and sell a few vegan products in their store, such as Daiya Shreds, vegan Worcestershire (which I purchased!), and a few other things. We were then given the delicious Rupee Sandwich, they name all of their sandwiches after world currencies (cute idea!), with a slightly vinegar-y filling on a fresh baguette.

We then traveled over to Pitfire Pizza for a couple of their seasonal pizzas. I forgot to mention this, but none of these places are solely vegan (with the exception of Babycakes NYC), so it was great to see these new options at all of these great restaurants. First, we were served an arugula salad with grilled peaches, pickled beets, and walnuts; followed by an heirloom tomato pizza and field mushroom pizza. As you can tell by my mother’s face (HI MOM!), above, the food was very good. The heirloom tomatoes were sweet and had an amazing flavor to them, and the more savory mushrooms on the other pizza went well with the daiya mozzarella shreds. They even had a gluten free crust option, although I think everyone preferred the “normal” crust; it was so fluffy!

Next up, is Buzz Wine Beer Shop, this place opened in early July of this year and is a little slice of booze and interior decorating heaven (sorry, I’m a design nerd). With a modern, but rustic, interior it has a welcoming layout and pretty easy to navigate. Before I get into details about the tastings let me just say that they DELIVER LOCALLY UNTIL 2 AM!!! Now, onto the wine & beer tastes.. Mmmm…

All of the wine and beer that we tasted was vegan, and some are biodynamic wines (research about that, it’s super interesting). The gentleman that talked about the wines with us was extremely knowledgeable, and I can’t believe I forgot his name, but my mother and I talked with him for a good portion of the tasting. Most of the wines were great, with the exception of the barnyard tasting one (puke); but I am more a fan of beer, so here we go!

I love craft brews, and beers in general, but my preference leans toward the darker side of things. Lagunitas offers some great beers, but I was not a huge fan of this one because it was so hoppy; if you like IPAs you’d love this beer. The Blanche de Chambly was better with more of a sweet, smooth taste that stayed light throughout the drinking of it. Orval’s Belgian Trappist ale was tasty but didn’t really stand apart in my mind, I’d like to try it again though to see what I think of it sober (ha ha!). Of course, my favorite was Allagash Black, a hearty stout with hints of coffee and chocolate. It was smooth and left a bold aftertaste, maybe not so good for the average beer drinker but I highly recommend it to dark beer lovers.

The next restaurant that we wandered over to was Más Malo, and this place seemed to be a favorite amongst many people in the group. They have a great looking menu with a decent amount of vegan items, but we tried the Vegan Menudo and the Soy beef taco with pickle (ewww pickles! I gave mine away). When the food arrived at the table, the smell was amazing. Right away I added the diced onion and cilantro to my soup and squeezed some fresh lime juice in; the menudo was INCREDIBLE, it was full of savory flavor and great texture which is way better than having disgusting tripe in it! The taco, sans pickle, was also quite delicious but I didn’t have a love affair with it like I did the menudo. Also, the architectural design in this building is amazing to look at, but I’ll do another post on the architecture part of this tour. 🙂 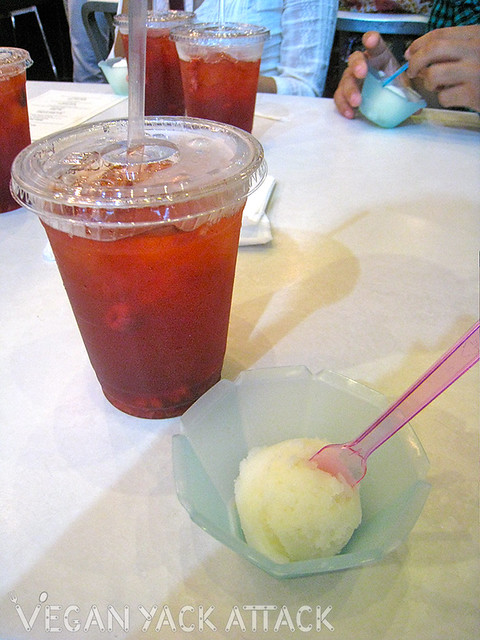 Syrup Desserts was our next destination and we enjoyed a Boston Iced Tea with fresh raspberries paired with pear champagne sorbet. I was a fan of the subtle sweetness of the sorbet, but thought that the Boston Iced Tea was a little too sweet for my taste but was still good. They have a cute, little storefront with a cool, open interior that I could see being very refreshing on hot days in DTLA.

Last, but not least, was Babycakes NYC. I have never had their desserts, but obviously have heard so much about them! Here the group received some gluten free blondie sandwiches! They were made up of chocolate chip blondies with a sweet icing filling, and man, they were delicious. I felt like it took me longer than I had anticipated to finish it because it was so rich! I would love to go back there soon and try out some of there other goodies, for sure.

After all of that food and beverage goodness we headed back to Pershing Square and said our goodbyes. You couldn’t ask to have better people on the tour to share this experience with, and everyone was awesome. The Urban Food Crawl is a great way to find out about new places to eat, meet new people with the same interests in food, and see the great architecture in Downtown Los Angeles (I’ll have some pictures of that in the next entry!). Go check it out and tell them that I sent you! 🙂