One of my family’s traditions each year is that whoever’s birthday it is gets to choose where to go out to eat. Usually I have a hard time picking just one restaurant, but now it’s even harder because I’m taking 3 omnivores along for the ride! But, this time, I had my sights set on going to Flore Vegan in LA; I have heard so many good things about this place and have seen their brunch menu which looks amazing. So, onward we traveled the 30-odd miles deep into Silverlake to seek this place out and try out the food!

My first impressions were: there is no parking (which if you’ve ever driven on Sunset Blvd. you would know), the place is TINY, and very popular. We got there about 30 minutes after they opened on a Sunday and had to wait 30 or so minutes to get sat. It’s a very casual atmosphere, and had a pretty good variety of people there.

Here are some pictures of the inside: 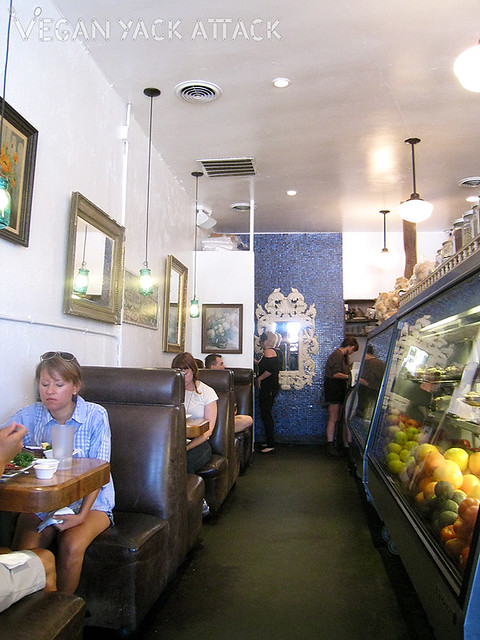 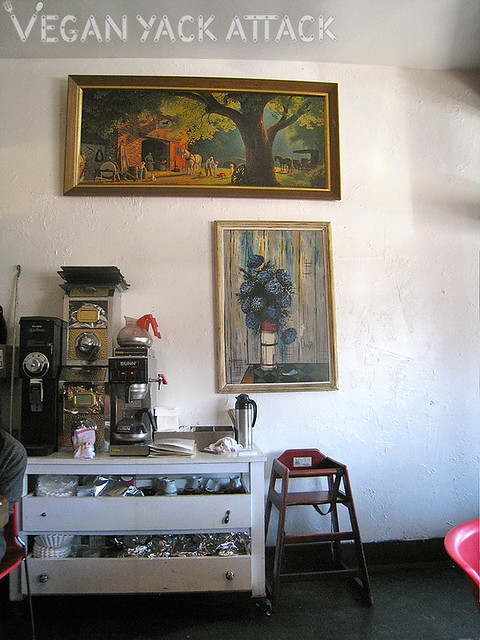 Once we sat down we were greeted by a very nice server and ordered some coffee and juices; my family also drinks water at a decent rate and the multiple servers were really great about keeping our cups filled. I decided that I’d get a pretty unhealthy meal of biscuits and gravy because I haven’t had those in a VERY long time. My father and sister both got the Country Breakfast, and my mother got the veggie frittata. The food didn’t take long at all to come out, and when it did this is what we got:

Biscuits and Gravy (also pictured above) 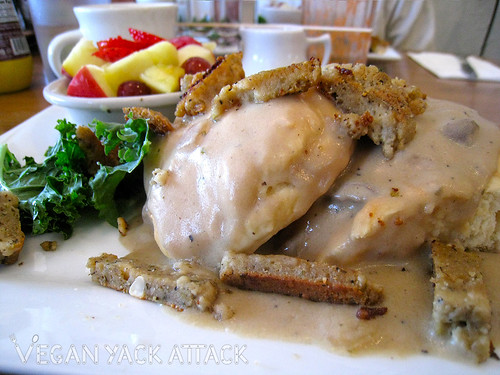 This meal ended up being very good, with fluffy biscuits and super delicious gravy, as well as chunks of tempeh sausage on top. I couldn’t even finish the side of fruit that I got with it because the biscuits were so filling! Overall, I really liked this dish and would get it again for sure. 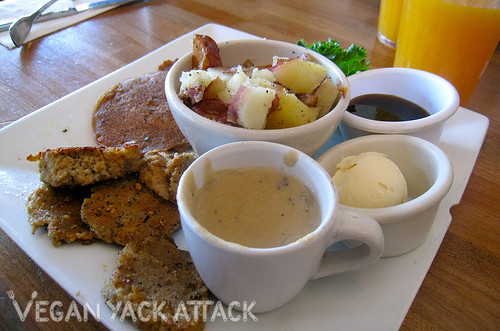 One of the first things we noticed about the country breakfast is that there was no biscuit on either of the plates. If you look at the menu is says that it comes with “Two silver dollar pancakes, potatoes, biscuit w/ mushroom gravy, and a sausage patty”, which seems a bit misleading when the plate shows up with no biscuit and many sausage patties. This confused my sister and father and they ended up just putting the gravy (which they both loved) on the sausage patties. In the end, they both were full and said it was pretty good, and definitely better than they expected (it’s like they swear that vegans eat shitty food!). 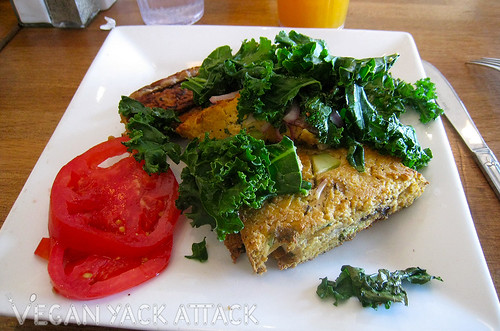 This is the dish my mom got, she’s a huge fan of frittatas (and eggs, unfortunately) so this was seemingly right up her alley. At first, she was taken aback by the fact that the kale was used as a garnish as opposed to being inside of the actual frittata. She was put off by the texture of it, noting that it was a bit mushy and smooth; I tried a few bites of it and had to agree to an extent, but I thought the taste was very good. 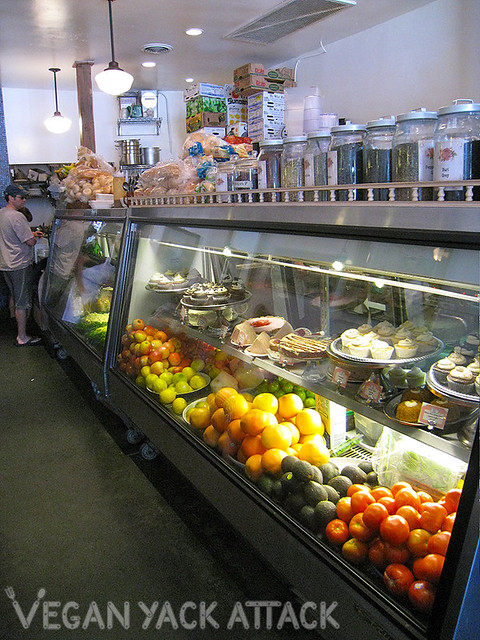 After we finished eating, I took a look into their little mini-market/deli/dessert case and searched for something to take home with me. Because I was already planning on baking cupcakes once I got home I decided not to get any sweets; instead, I got a loaf of awesome looking, multi-grain bread. Excited to try out the bread later on, I started to look it over on the drive home; it wasn’t until we were about 5 miles away from home did I notice that it had mold on a couple sides of it.

Yuck! They were little spots that sort of blended into the darker flaxseeds and grains, so I hadn’t seen it when we were still in LA. We got home and I trimmed off the moldy parts and took out 2 or 3 slices, then froze half of it. I called Flore immediately, and they told me I could come in and exchange it (but, there’s no way I’m driving 30+ miles to exchange bread), and I really just wanted them to double check the rest of the loaves. The gentleman I spoke to was very nice and apologetic, and said that the next time I come in that they would work something out with me. The bread (other than the mold) was great though, so if anything just check it out before you take it home with you.

All in all, I enjoyed my brunch there and would go back again; but, only with one other person instead of 3 so that we wouldn’t have to wait as long. I’d love to try out their dinner menu, that looks pretty great as well!

One Comment on “Birthday Brunch at Flore Vegan Cuisine in Los Angeles, Ca.”