Finally, I have edited all of the photos for this incredible event and I have them for you today! The ladies over at Urban Food Crawl have done it again, and set up another great event for Southern California vegans. This times it’s something chock full of vegan cupcakes and cupcake-themed art that’s just adorable. Even though the bakeries made mini cupcakes for the event, by the end of it, I was in a sugar coma and convinced that I somehow had gotten diabetes (I was a little delusional at that point). 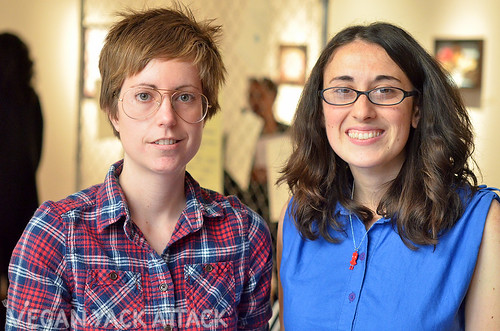 Pictured above are Sherri and Jen, the founders of Urban Food Crawl, they are so awesome and totally sweet. It was Jen’s birthday the same day of the cupcake event, so I hope that she got plenty of cake! 🙂 The ladies also did some neat little interviews with most of the bakeries prior to the big day, so I’ll be linking you to those along the way. 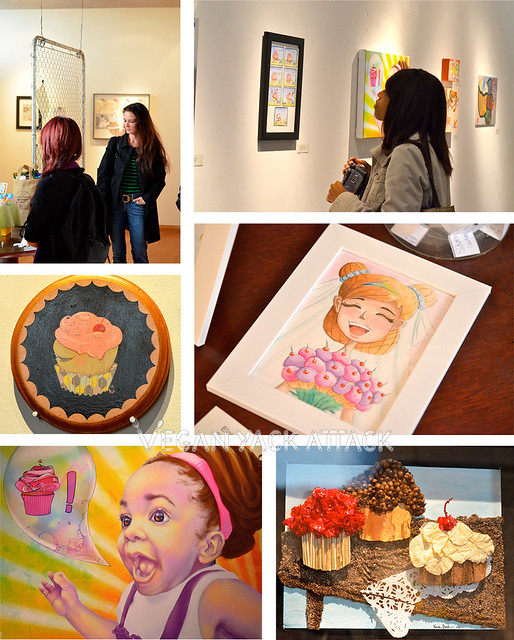 When you first walk into Hold Up Art Gallery, you’re met with Sherri and Jen’s smiling faces and tons of cute cupcake art. Above, are some of my favorite pieces by local artists, so adorable! The proceeds from the art went to the Best Overall Cupcake winner’s charity of choice, how great is that? Totally great.

Walking to the higher level of the gallery, I first came upon Jamaica’s Cakes. Unfortunately, Jamaica herself was not there, but her husband was there to show off the three different types of cupcakes that they brought. You’ll have to bear with me, I don’t have the complete list of cupcakes with me (I’m in Reno ATM), so some of these may be wrong. 😉 They chose peanut butter and banana, chocolate raspberry and a classic red velvet cupcake to represent them, and you can find their interview here. 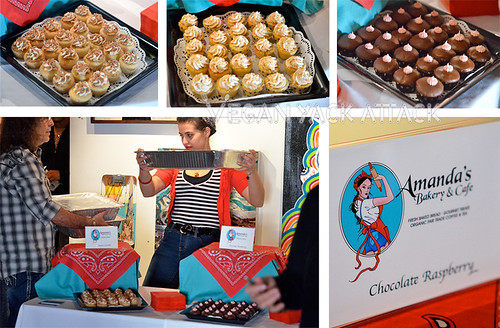 Next up, we have Amanda’s Bakery & Cafe from West Hills, CA. She was super nice, conversational, and as cute as her cupcakes. She brought some delicious cupcakes to the table (literally) with flavors like Maple Crumble, Coconut Vanilla and Chocolate Raspberry. The maple crumble was one of my favorites, but I’m a little biased when it comes to maple. I love the picture she used for the interview with UFC. 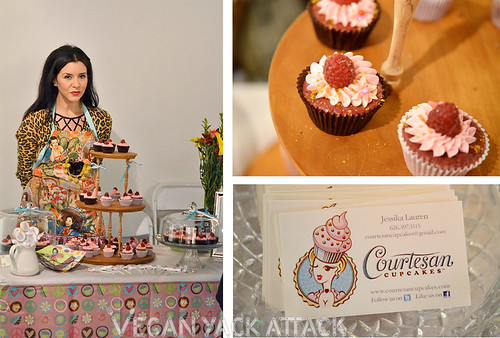 Jessika from Courtesan Cupcakes, brought Raspberry Rose cupcakes with here that were probably among the cutest cupcakes there. The had a very interesting and lingering taste of rose to them, which I had not yet encountered. I absolutely love her logo/business card, and the baby picture in her interview.

Babycakes showed up to the party with an unassuming Chocolate Brownie cupcake with vanilla frosting. The classic combination of vanilla and chocolate was delicious and very rich, the chocolate chips inside the cupcake took this humble cupcake to a whole new level. Yummy! 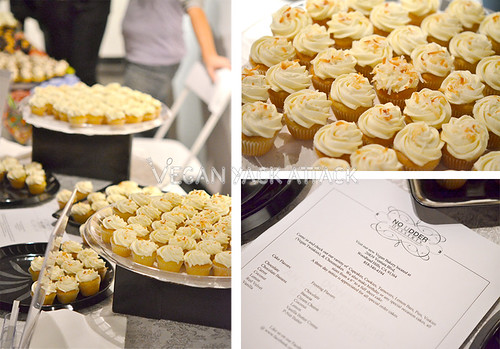 I am a lover of coconut, I’ll put it in almost anything, so when No Udder Desserts brought their coconut cupcakes to the event I couldn’t wait to try them! Coconut was used in every part of the cupcake, the frosting which was made with coconut milk was amazingly light and very flavorful.

Cupcakes with names like Tahitian Vanilla Salted Caramel, Chocolate Peanut Butter, and Chocolate Drizzled Banana Cupcakes you better believe I was immediately drawn to Bake You Happy‘s table! Kim and Kim were such a pleasure to speak with, and were very personable. They also had a hard time keeping up with the refilling of cupcakes, obviously a good sign. 🙂 You can read about their chat with UFC here. 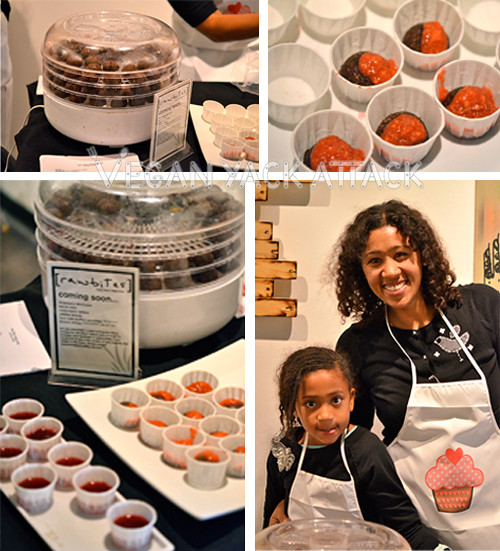 Rawbites came through with delicious raw Lavender & Double Cacao cupcakes with strawberry puree paired with Hibiscus Tea. Julie and her daughter (her sous chef) were so cute, and she went on to talk to everyone who came by about the benefits of a raw diet. I’ll be showcasing her talents and a recipe soon on here, and I absolutely cannot wait. Check out her interview here!

There was only two different bakeries that had pumpkin spice cupcakes, and I was incredibly excited to try both of them. The first one was Crushcakes & Cafe, who also brought a chocolate cupcake with vanilla frosting, and it was extremely delicious. Like me, she likes to ride bikes, which we learn from her interview.

Sweet Alexis is owned by Michele Fellows (Alexis’s Mother), and was founded because of the severe food allergies that Alexis suffers from. But, there is a good side to this! Everyone can now benefit from said allergies and eat tasty cupcakes like sunbutter chocolate, chocolate merlot, and pumpkin spice. Read about the start of Sweet Alexis here. 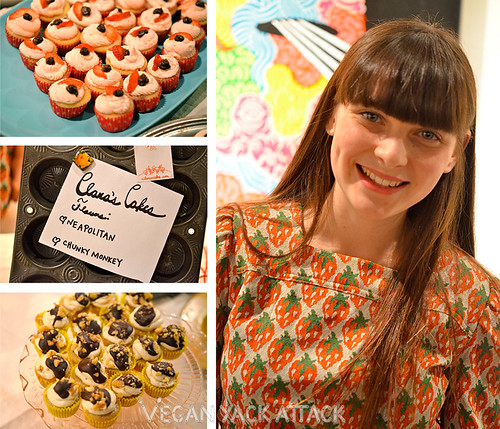 If you ever find yourself talking about ambitious young vegans, Clara from Clara’s Cakes better be one of them. She is 14 and making a name for herself in the vegan baking world. With flavors like Neapolitan and Chunky Monkey, she won me over and the chunky monkey was my personal favorite of the day. I wish here the best of luck with her venture and I hope that she goes a long way! Read more about her in her interview with UFC.

Above are the winners and runners-up! Congrats to everyone that won, it was a great experience and I’m so glad that I went. I can’t wait for the next amazing event in LA, and I might possibly do the new Silverlake Urban Food Crawl tour that they are doing on Sunday afternoons, sounds awesome! 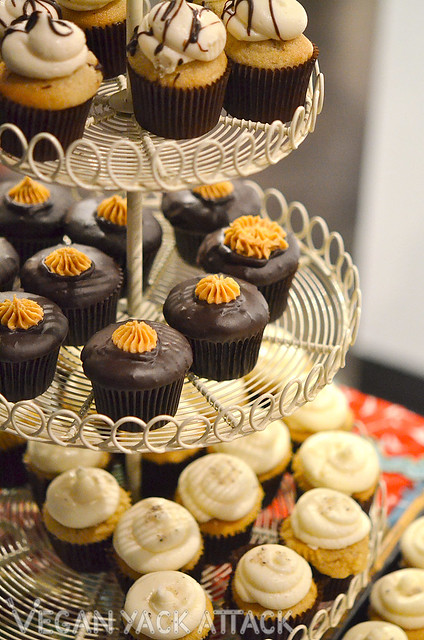 If you or your company would like me to review and take photos of their food or event, contact me at: jackies@veganyackattack.com