When bringing up the topic of any holiday my boyfriend truly couldn’t care less, even his own birthday! Needless to say, Valentine’s Day is no different; I am not super huge on Hallmark holidays either, so nothing usually happens on the 14th of February each year. I say usually because this year LOVELIKEBEER was putting on a vegan dessert and beer pairing event down in San Diego and I really wanted to go to it. To give you a bit of background on LOVELIKEBEER, the organization is led by two gentleman by the names of Derek and Corey. They’ve put on a few different events over the span of 2011, all having to do with vegan craft brews and food. Here’s an excerpt from their about section:

LOVELIKEBEER is an organization dedicated to creating inspiring Vegan Food and Craft Beer events in San Diego with a charitable purpose. We work with local artisans and entrepreneurs to host culinary events which incorporate innovative, vegan cuisine, craft beer pairings, and a donation to a local charity.

Great events for a great cause? I’m in! So, we made the two-hour trek down to Tiger! Tiger! Tavern in San Diego; not realizing that there would be delicious vegan dinner options as well, we ate before leaving. 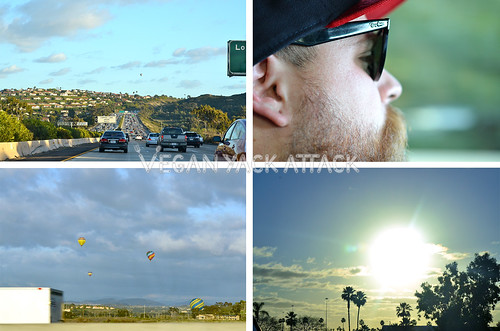 The drive wasn’t too bad, just a little traffic and the scenery was gorgeous as usual. Once we got to the tavern, we opened the door and walked into a large, dimly lit area that had four long communal tables with bench seating that were decorated with Chimay candle-holders and deep red rose petals. Definitely giving off the romantic vibe for V-day. 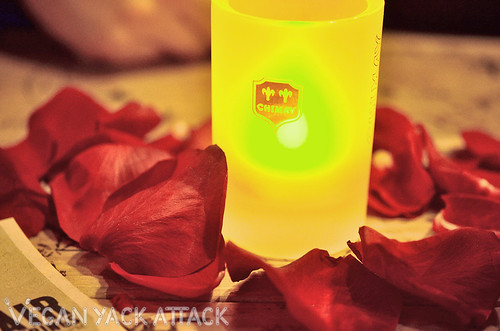 I grabbed a menu, took a seat and was immediately regretting that I had already eaten; so much of the food sounded delicious! I had put myself in quite the predicament, but got past it and looked to the dessert and beer pairings. Of the three, only two really stuck out to me. This was mostly because the odd-one-out was a donut, which I am not a fan of, paired with Framboise which is a raspberry beer-like beverage that sort of reminds me of a wine cooler. I did hear that it was quite delicious, but it just didn’t sound like my cup of tea. 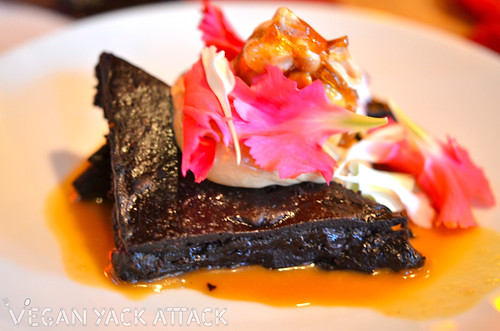 The dessert that I decided to start with was the Chocolate Peanut Butter Brownie with Caramel Sauce and Salted Peanut Brittle paired with Hangar 24’s Chocolate Porter. Let me tell you, this dessert was seriously good. It was rich and decadent, and almost a little too heavy but I loved it. I made sure to drink the beer intermittently with having bites of the dessert and the balance between the two was bordering on perfect. The stout had more of a dark chocolate feel too it, and broke up the intense sweetness of the brownie and caramel sauce with ease. I would love to recreate something like this at home! 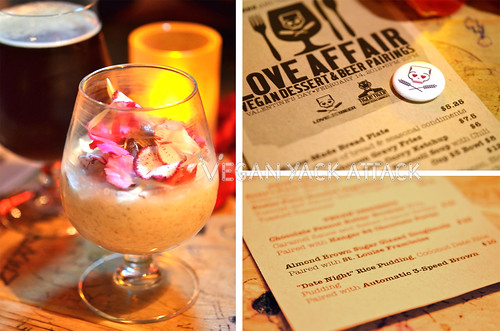 For my second, and last, dessert pairing I chose to order the “Date Night” Rice Pudding, which was Coconut Date Rice Pudding paired with Automatic’s 3-Speed Brown. Besides the excessive amount of flowers atop of this dessert, it was great to end on. Compared to the brownie, this rice pudding was light and not to sugary, but had great subtle flavors of coconut and dates. A great approach to this dessert is to eat a spoonful slowly, and at the same time waft the scent of the brown ale into your nostrils. Doing this brings an excellent coffee note to the rice pudding that you can’t necessarily get through imbibing it. 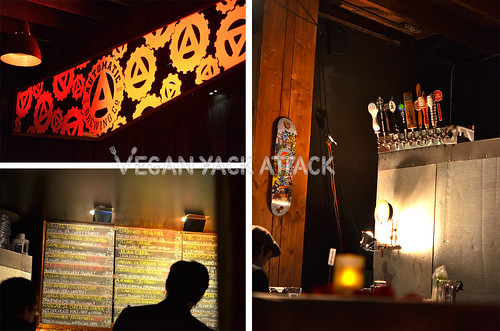 Tiger! Tiger! Tavern has a great vibe and a terrific selection of brews, amongst them are some from Automatic Brewing Co. which is their in-house brewing company. The brewmaster for Automatic used to be a brewmaster at Stone Brewery in San Marcos for years, this should give you an idea of the quality of their brews! 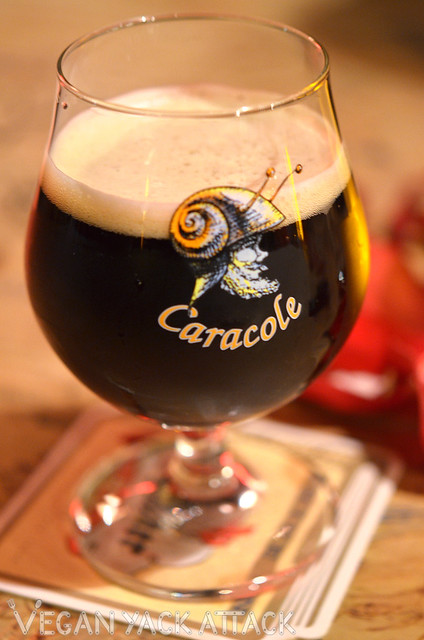 After finishing off the desserts, I thought that I’d enjoy just one more beer before heading home. I typically stick to darker brews, so I thought that I’d try out the Ovila Quadrupel from Sierra Nevada Brewing Co. This beer ended up being full of flavor and a little on the sweet side, which is how I like my malty, dark brews; it had a smooth finish and wasn’t very heavy. I would definitely order this again. 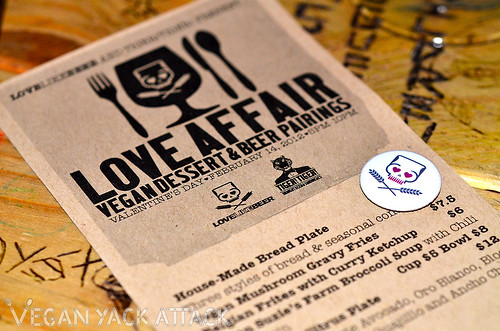 Overall, it was a great experience and I enjoyed meeting the guys that put this together along with Melissa from Vegenista, who is a total sweetheart and a couple of other people from around the area. I can’t wait for LOVELIKEBEER to put on their next event, which looking at their past will tell you will be in roughly two months. Woohoo!

I am curious what is the taste of this Zebra Berry Crepes hmmmm, I am excited to try!

Hey Jackie, I have been a fan of your site for quite some time. I enjoy this post and find food and alcohol pairings fun and interesting. I have seen you recognize other bloggers and think that is very thoughtful of you, so all things considered, I am giving you the Versatile Blogger Award! Congrats and thanks again for the wonderful vegan ideas!

Aw!! Thank you, so much Julia! That means a lot to me. And thank you for continuing to come visit my lil' ol' blog! :)