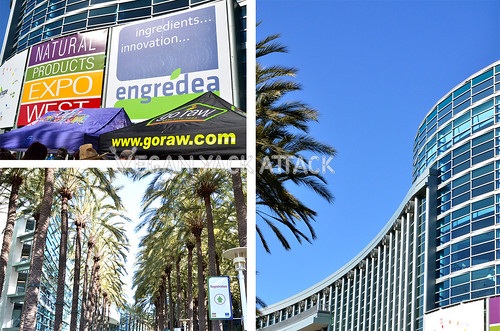 After editing entirely too many photos, I’m already overwhelmed by what I’m about to show you in this post! I’m going to try and be brief about each company that I cover; I’m only highlighting a few of the brands that either stuck out to me or that had new products to show. And of course, as you can see by the title, there’s a giveaway at the end filled with tons of goodies that are all vegan! 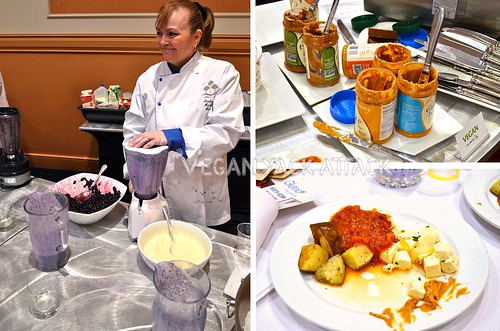 As some of you may know, I went to the Expo with Jill of Vegan Cuts; if I had gone by myself I think I would have been completely overwhelmed! There was a breakfast sponsored by Earth Balance and Glutino the first day, but it was rather pathetic for anyone that is vegan. There was a smoothie bar where you could get a soy yogurt/milk/blueberry smoothie (not a whole lot of fruit :(), some soggy tofu and some fried potatoes that I put salsa on. Earth Balance’s new peanut butters were there, but all of the bread wasn’t vegan! Urgh. I just spooned some onto my plate (as seen above), thankfully there would be tons of samples coming our way. 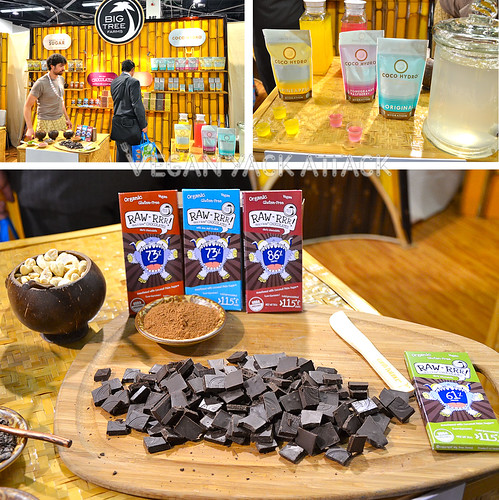 One of the first booths we stopped by was Big Tree Farms. Their raw chocolate was creamy and rich; but the product that we were most interesting in was their powdered coconut water. Coco Hydro is a powdered coconut mixture (some with different natural flavors) that you combine with water when you want to have coconut water on the go. It tasted good and was very interesting, plus the new packaging looks very clean. 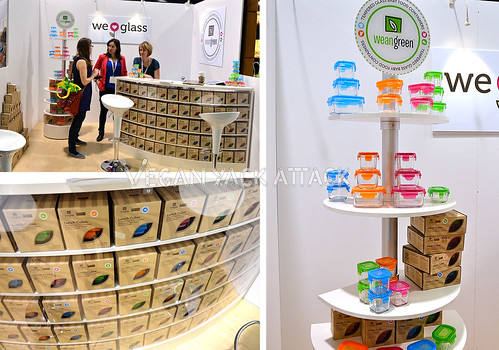 Wean Green, a company hailing from Canada, has taken the old concept of Pyrex containers and revamped them to have a secure lid and unbreakable container. Even though their products are targeted toward families/parents with babies and young children they can appeal to a broader audience than that. The colorful lids that snap securely onto the container are brilliant and heavy-duty. 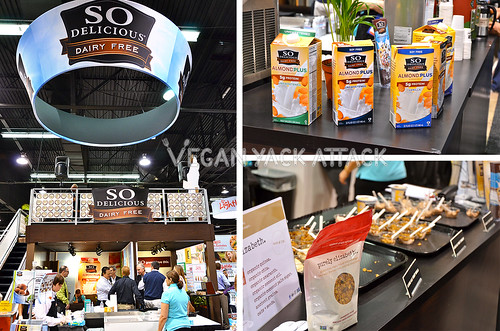 I quickly stopped by the So Delicious booth to check out their new line of almond products, plus pick up some tickets for the Vegucated screening that was going to be happening that night. The new flavors of the almond Greek-style yogurt that I tried were chocolate, vanilla, and blueberry (the also have original flavor); the blueberry was definitely my favorite. Their line of almond milks have added protein in them and taste great, but what really stole the show for me was the new almond ice creams they had. Mocha Almond? Yes, please! 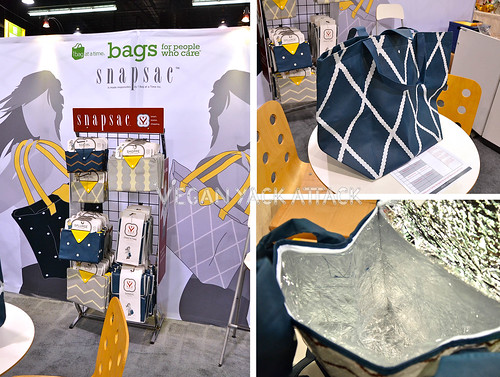 What initially caught my eye about the Snapsac booth, were the very modern color combinations (some of which I am slightly obsessed); I immediately fell in love. The tote that you see picture above is massive, and because they were handing them out the first two days, I got one! These bags have a sturdy construction and are made of plastic, and can be recycled. 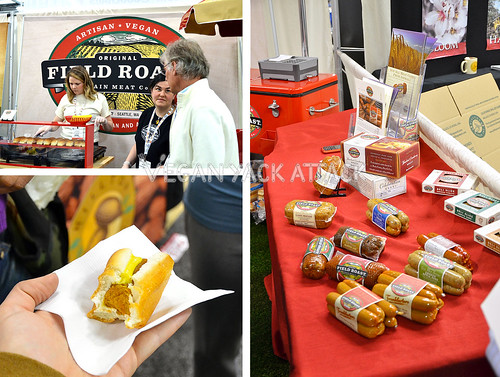 Field Roast was there with their delicious assortment of grain meats. I tried one of them out (I believe for the first time), and it was extremely tasty. I could definitely see myself buying some of these when the summer months come around, for BBQs! 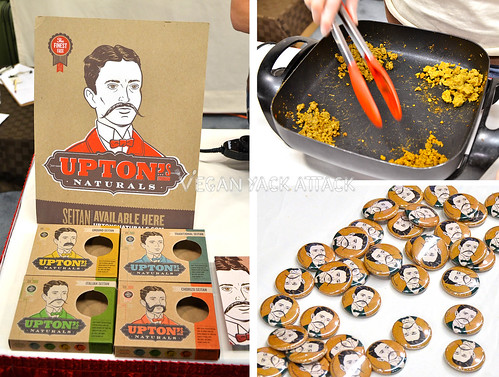 Right across the aisle from Field Roast was Upton’s Naturals. I had really been looking forward to stopping by their booth because I had heard so many good things about their seitan prior to the Expo. They did not disappoint! Of the four flavors they had (Original, Crumbles, Italian, and Chorizo), I tried them all. I have to say that the Italian was definitely my favorite, and the Chorizo was good but I thought the spice needed to be taken up half a notch. It was great speaking with the owners, they are genuinely nice and I enjoyed my time there. 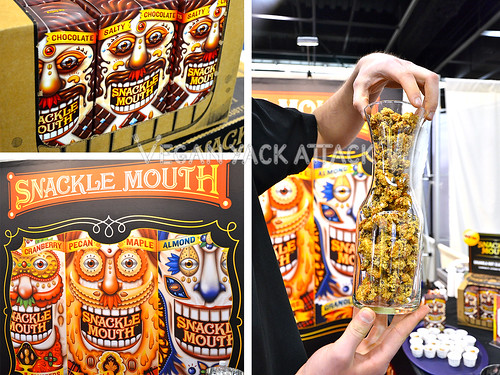 The company I have here first caught my attention because of the packaging (well done!), and I wasn’t sure if I was really into it or just going to have nightmares once I fell asleep. Either way, not all of Snackle Mouth‘s snacks are vegan, but most of them are. I was visiting this booth with Demetrius from Vegucated (him and I are both design nerds), and we came to the conclusion that this brands product was a mixture of PoppyCock and Cracker Jacks, but even better. 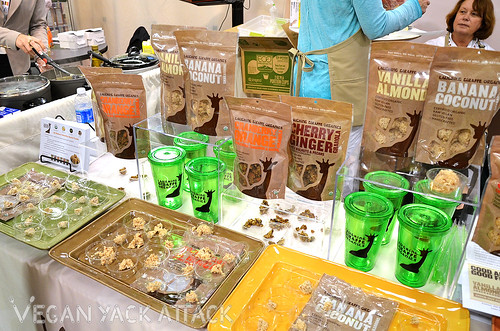 Next up, is Laughing Giraffe; these raw, gluten-free, vegan snacks were quite the treat. With products like Banana Coconut Snakaroons and Cherry Ginger Granola, you really can’t go wrong. They have quality foods with great flavors and great people to back them up. 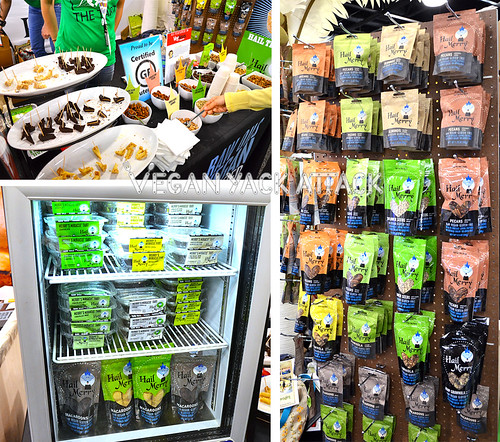 I found myself raving about Hail Merry‘s desserts and snacks long after I left their booth. I tried nearly every sample they had out (I’m a glutton when it comes to desserts) and if there was heaven on earth, this would be it. All of their products are raw, gluten-free and vegan, and DIVINE. The mint chocolate tart was seriously dangerous, and I can’t wait until the next time I go to Whole Foods to buy one. It was that good. 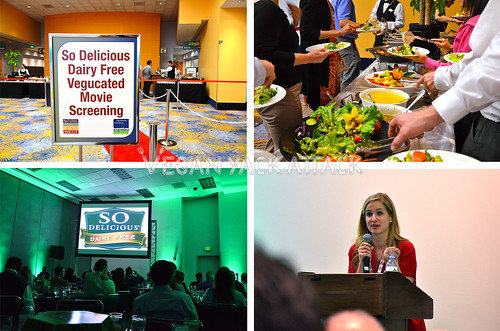 After enduring the first day, Jill and I headed over to the Vegucated screening and met up with a few other bloggers. Dinner was provided, and was delicious, as well as nice lil’ goodie bags. After the movie was over, Marisa Miller-Wolfson did a Q&A which was handled beautifully and thoughtfully. Overall, it was a great event and thanks to those that made it happen! 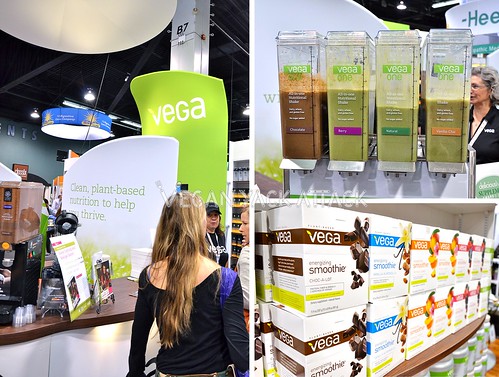 Vega had an enormous booth there, and I was able to try out some of their recently launched line of supplements. The vanilla chai flavor was insanely good, and even though I’m not to keen on doling out lots of cash for protein powders I may pick up one of these smoothie packs the next time they’re on sale at Sprouts! 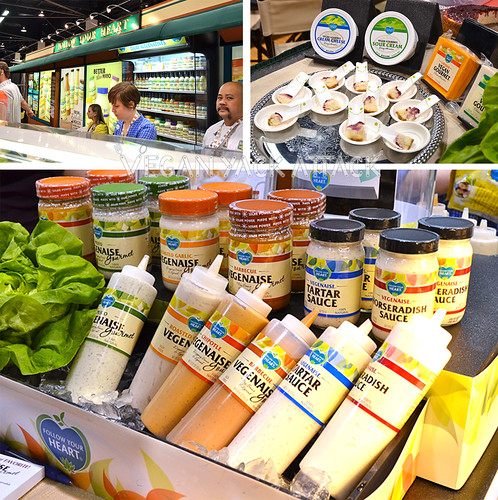 One of the pinnacles of my weekend was trying out all of the new products from Follow Your Heart. I was most excited for the creamy horseradish sauce, and now I think I need a lifetime supply of it. 😉 All of the new sauces/spreads were very delicious, especially the Barbecue Vegenaise; now we’re talking! 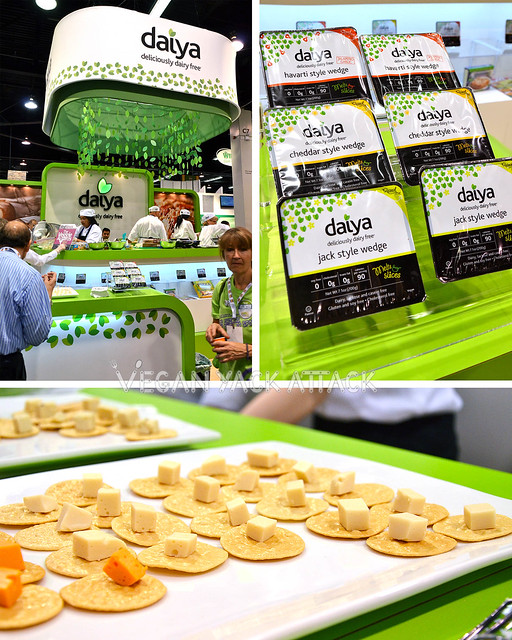 Of course I couldn’t have gone to the Expo without trying out the new Daiya Wedges, that would have been vegan sacrilege! They had three flavors in wedge style: Cheddar, Jack, and Havarti. I think it’s safe to say that most people’s favorite was the Havarti, with flavors of garlic and jalapeño it was packed with flavor! I can’t wait until these hit stores, I will definitely be snatching them up. 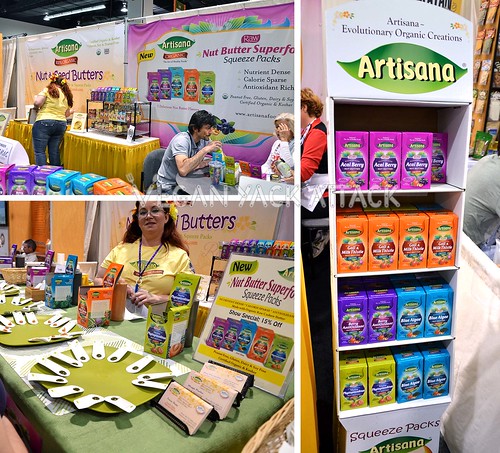 Artisana came to the expo with these incredibly interesting nut butters. All raw and vegan, they are packed in mini-squeeze packs for convenience and probably portion control (although it seems a little wasteful). They have five flavors in their new nut butters: Goji Berry & Milk Thistle, Acai Berry, Marine Phytoplankton, Blue Green Algae, and Berry Antioxidant; out of all of them, I think that the Goji Berry & Milk Thistle was my favorite, but it was definitely hard to choose. 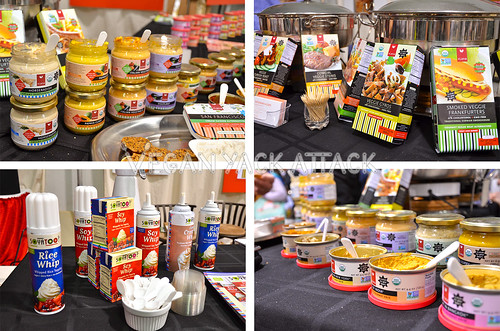 Viana is a company that is actually from Denmark, and even though they have a couple of products in the US market right now, they are bring several different lines over this year. This includes a crazily accurate tasting Cashew cream cheese spread, plus some delicious faux meats and a plethora of vegan spreads that are all yummy. I can’t wait to see what happens with this company. 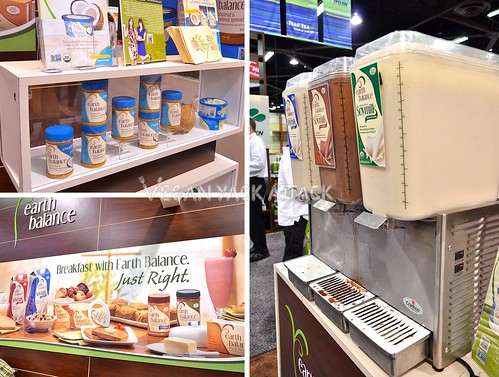 Coconut and peanut butter are two of my favorite things, so when Earth Balance successfully combined them, I knew I had to try it out! I loved both the crunchy and the creamy, smooth peanut butters and I’ll be waiting with bated breath for them to show up in my nearest grocery store. They also hosted a signing with the Spork Foods ladies, Heather and Jenny, and I was able to get a picture with them plus their newest cookbook. Success! 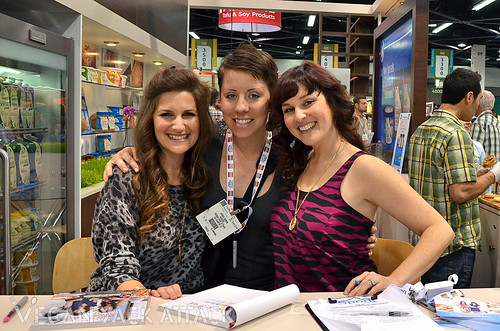 Spork Foods Ladies and I 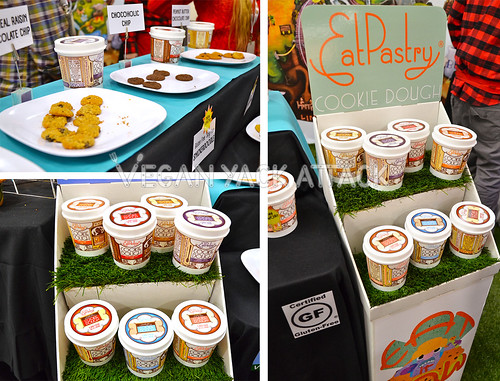 Eat Pastry had a booth there and although I had never enjoyed their delicious cookie dough before, now I’m wondering how I had gone so long without it! They have some awesome gluten-free options for those of you out there that prefer to go without. And if you asked me, I really couldn’t tell you a favorite. 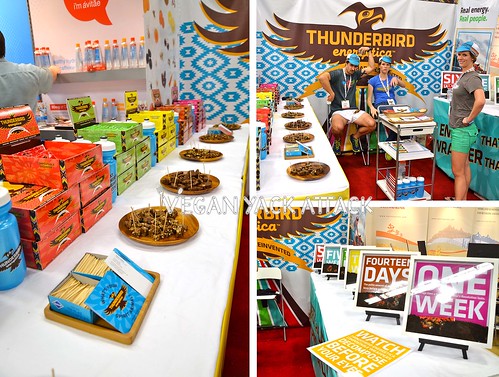 This was one of my favorite booths to visit, the people of Thunderbird Energetica bars were super nice, flamboyant and just a joy to be around. The company makes raw, vegan food bars that are great for active people on the go. Not only is the packaging and branding gorgeous, it’s also very biodegradable! Everyone is winning here. Not only do I love this product, I would also not mind having these awesome people as friends. 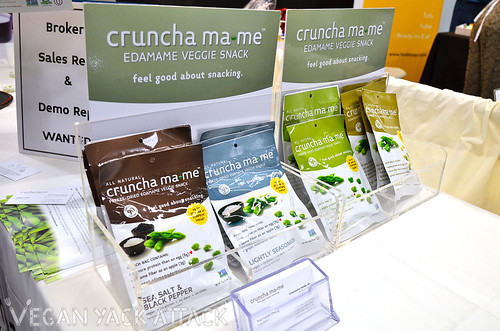 I didn’t expect a lot from Crunchamame, but was pleasantly surprised by how tasty these lil’ snacks were! I know some of you out there try to avoid soy, but the way this snack is prepared (by short-blanching) it stops the inhibitor that most people are worrying about and makes it easier for you to absorb edamame’s protein and nutrients. So dig in to these healthy treats! 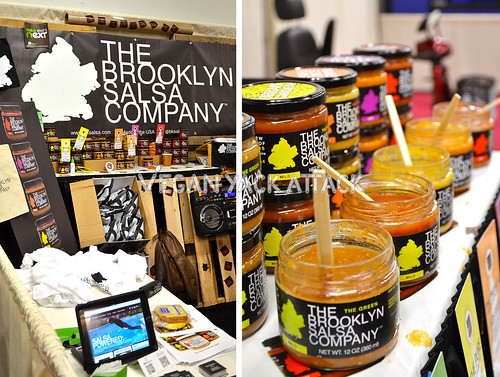 All I have to say about Brooklyn Salsa Company is that all of their salsa is amazing, their new mole sauce is amazing and they are definitely a fun bunch. Although, they only have one store in Silverlake (Los Angeles) that sells there salsa to Southern California; from the sounds of it they will be spreading their inventory even more, thanks to the expo! 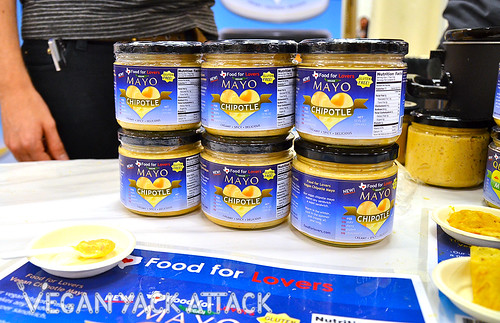 I had somehow missed the Food for Lovers booth the first day that I was there, but I was glad that I found it before the whole thing was over. They had two out of the three new flavors they’re coming out with there, and I tried both of them: Chipotle Mayo and Mild Queso. Both were delicious, but what I’m really waiting for is their sausage gravy; talk about building anticipation!

Now to the FUN Part! 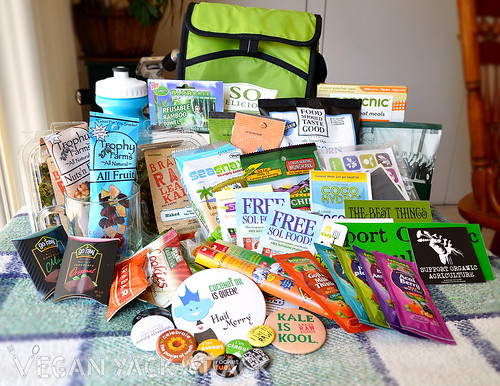 The giveaway! I have a separate picture on flickr to give you a closer look at what is in the package you may receive. Basically, it’s a ton of cool stuff and you have lots of ways to enter to win it! Go to the widget below that makes your life, and mine, easier when it comes to entering! Good luck to everyone, the giveaway ends at 12:00am 3/23/2012. OPEN TO U.S. RESIDENTS ONLY! >3

[...] thought that by making this dish the Wednesday before Expo West that I’d be able to post it in a timely manner and not leave you hanging for a week. Clearly, [...]

[...] first time I had ever heard of snackLets kale chips, was when I went to Expo West this past March. I spoke with Gina, one of the co-founders, who was incredibly nice and very [...]

I want to try everything!!! The thunderbird bars look super yummy!

gah i want to go to expo west! I'm so stoked for the daiya cheese blocks to become available in omaha :)

So excited about So Delicious coming out with an almond line! We need more almond yogurt on the shelves ....