Finally, the recap that I’ve been totally intimidated to write-up, if only because of the length and sorting through SO many pictures. But, I’m back from Vegan Utopia aka Portland, OR. and I’m ready to show you how Vida Vegan Con went! To give you an idea of what I’ll be going over in this post, it’ll be awesome vegan food, more food, probably some beer, many links plus, more food. 😉 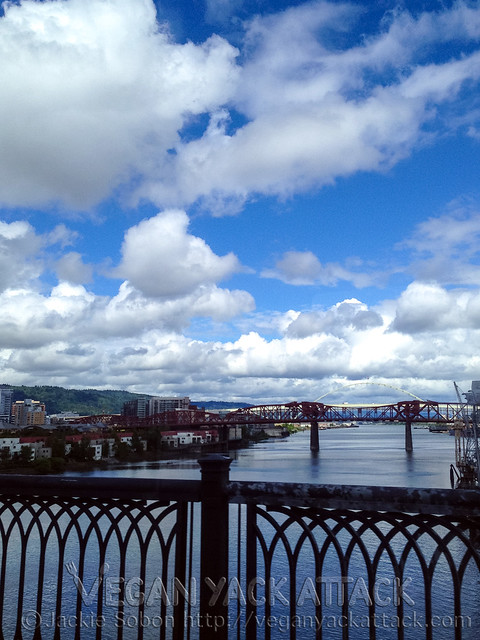 When the weather cleared up, on Sunday

I was in PDX for a whole week! Thankfully I stayed with some awesome people that were going non-stop, so we did many, many things around this rainy, green city. My plane landed on Tuesday night (21st) and immediately I was taken to Los Gorditos for a taco snack and Apex for some beers. My first impression of Los Gorditos was that they had signs on the outside of the restaurant that said “FULL VEGAN MENU” and “FULL MEAT MENU”; I was totally shocked! Not because of the meat, but because they had to go out of their way to show you that they had both options there. I have never seen anything like that in Southern California, and it was awesome! Out of the two tacos that I tried, I absolutely loved the caramelized onion taco, the soy curl taco was pretty good, too. At Apex, I found what is now one of my new favorite beers, New Belgium’s Trip XV Buckwheat. So, so good. 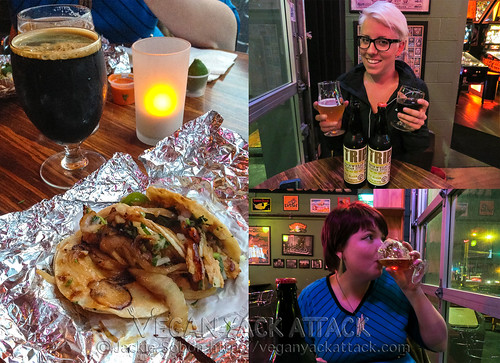 Next up, my friend Sarah and I headed to the infamous Casa Diablo. If you aren’t familiar with this establishment, it is a vegan strip club in Portland. What is a vegan strip club, you may ask? One where they have a fully vegan menu and you are not allowed to wear fur/leather into it. Aside from that, I don’t really know the difference. I won’t go into details, but we ordered a couple of things from the menu and chowed down. The chili cheese tater tots were really good; but if you don’t like salty junk food, you probably shouldn’t order them. (Sorry for the crappy photos, too much red light!) 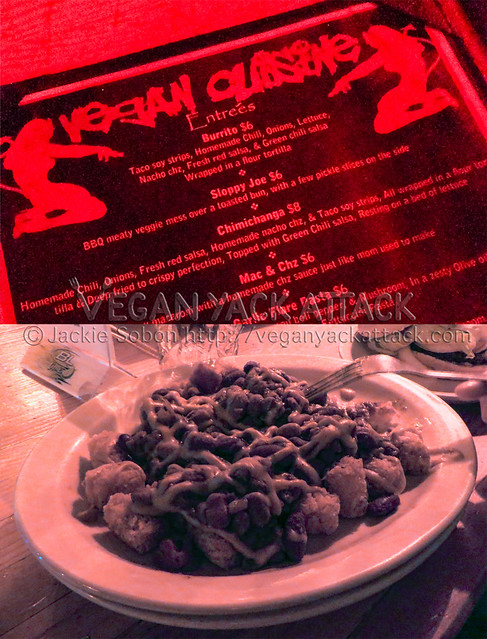 Needless to say, I wasn’t feeling in tip-top shape the next morning, when I went to meet up with Joni and get set up in our Airbnb apartment. She welcomed me with a Kahlua and Coffee and that gave me an idea of just how this weekend was going to go. (Which was GREAT) Soon, we made our way over to Homegrown Smoker with Michelle, one of our other roommates, and shared a couple of dishes between us. Most notable was the Macnocheeto Burrito which was pretty delicious, although the BBQ sauce was a little sweeter than I prefer. 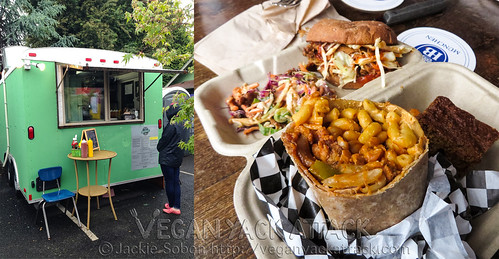 Later that night we checked out Canteen, where we ate some amazing bowls; the Portland bowl was my favorite, and the Bangkok Bowl that I got was a solid runner-up. Afterward, we briefly went into Food Fight! Grocery, an all vegan grocery store right down the street, bought some beanies and some snacks. 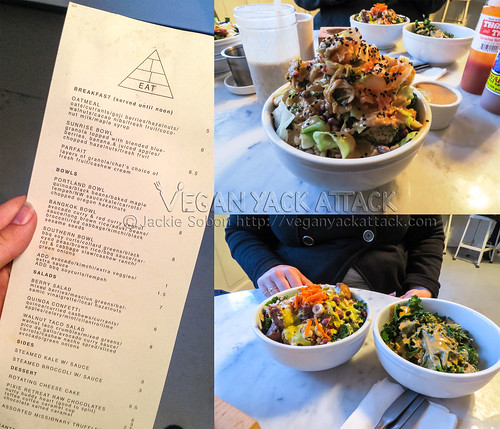 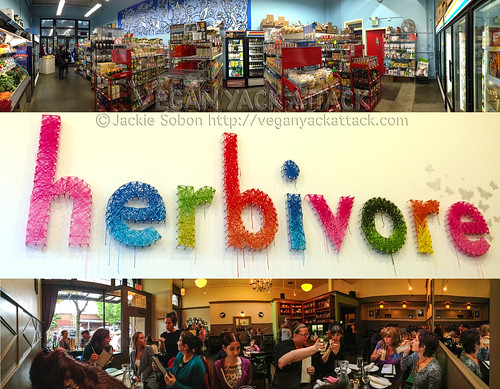 The next morning, we indulged in the vegan Sausage Waffle sandwich from Flavour Spot. You want to talk about an experience? I was loving it, fully knowing that this was probably one of the least healthy items that I was going to eat on this trip. For lunch, I ordered a side of one biscuit with gravy at Hungry Tiger Too; because I was still slightly overwhelmed by breakfast. Lou and Kelly got the Philly Cheese steak sandwich and corn dogs, respectively, which looked incredible. Just make sure to specify that you want it vegan, because they have two menus. 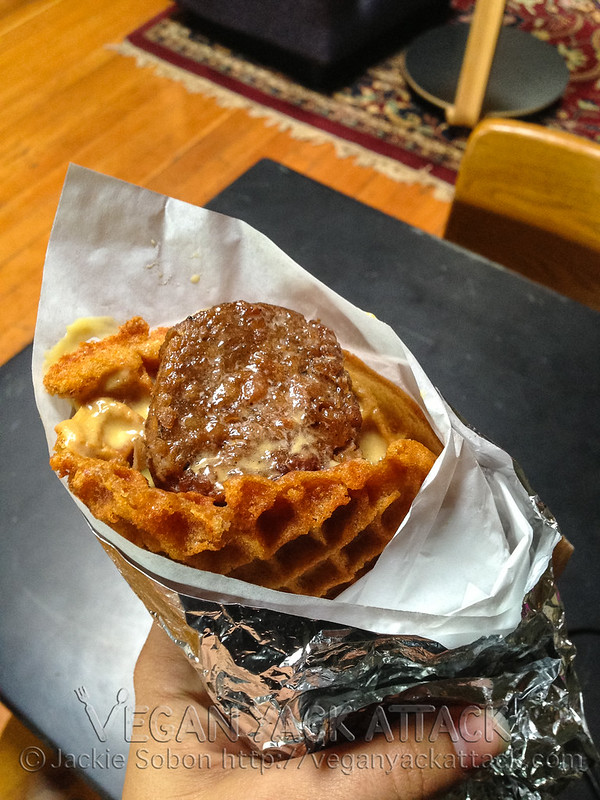 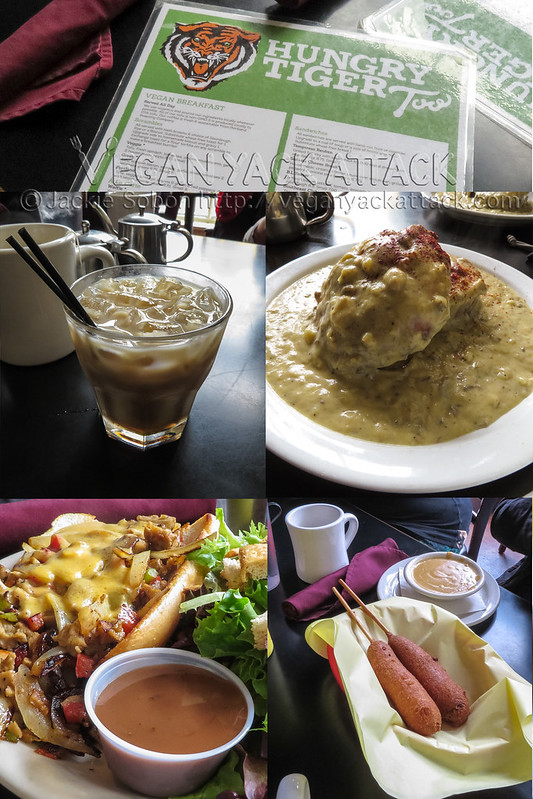 White Owl Social Club was the next stop for a meet and greet, and I have to say, I was anxious as hell. Going into a room filled with bloggers that you’ve talked to online, and already created this personality for can be weird. Will they recognize me right off the bat? Will I be the opposite of anything they anticipated? Will we all just walk around finding people that we already know and avoid new ones? Luckily, this was in a bar and beer can help ease these awkward (for me) situations. That’s not to say that I’m not an outgoing person, I can be; but the ice-breaking part can be so weird! So, I met a few bloggers that were totally awesome and was sad when we had to head out to a premiere of a vegan travel show that is looking for funding.

I hadn’t eaten at WOSC, so Joni and I made our way over to the Bye and Bye for the first time that weekend, which is a fully vegan bar. I felt kind of dorky looking at the menu because I turned to Joni and asked, “Sooo.. what’s vegan here?” “Um, everything!” Oh man, was I stoked to enjoy fluffy pretzel bites with a cold beer. Throughout the weekend I had to keep reminding myself that this is a real place! 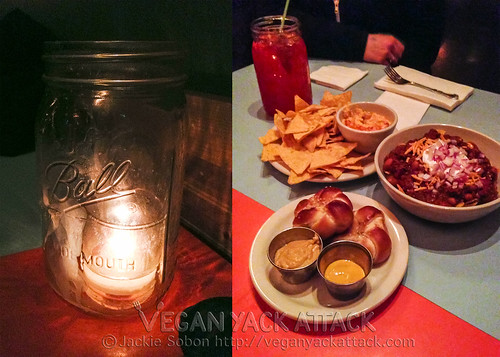 Snacks at the Bye & Bye

Friday morning I woke up excited, but also nervous, for the start of the conference. Our group of 5 roommates made our way to the Portland Art Museum to register, then went to Veggie Grill for “brunch”. Being from Southern CA, I felt kind of bad eating at a restaurant that has a location 5 miles from my house, but two of the lovely ladies with us had not been there yet which made me feel better (Stupid vegan foodie problems).

At the end of the day, I made my way over to Blossoming Lotus to have dinner. I was incredibly thankful to be surrounded by the talented women that I had dinner with! Here’s the line up: Miyoko Schinner, Fran Costigan, Allison Samson (Allison’s Gourmet), Kristina (Spabettie), Hannah Kaminsky (Bittersweet Blog), Julie Hasson (Native Bowl, Julie’s Kitchenette), Sharon (Big City Vegan), Gail and a couple of her lovely assistants from So Delicious. Um, can you say, overwhelming? I can! Aside from the amazing company, we shared some extremely tasty dishes. The quality of the dishes there is high, the presentation appealing, the servers helpful and the atmosphere cool. I won’t go into all of the dishes, but my favorite was probably the most unassuming one; the Artichoke Fritters with Lemon-Caper Sauce.

Breakfast was served to us at the conference the next day, with restaurants from all over Portland being represented at small tables, serving a good variety of food. Don’t be intimidated by my breakfast spread, I ended up not eating the yogurt. 😉 I loved the breakfast pizza from Sizzle Pie and the Quiche/Savory Tart from Back to Eden. For lunch, we had a buffet-style build-a-bowl line with tons of options which ended up in a green/brown/red (from sriracha) blur that satisfied my hunger. “Dinner” was had at the Galarama after the conference, where I spent most of my time chatting with Erin and Jeff of Olives for Dinner; to put it bluntly, they’re awesome. But, anyway, I had a few beers and snacked on the cheese plate that Miyoko made which was pretty phenomenal.

Skip to lunch, Sunday afternoon, we had a build your own sandwich line! My sandwich had Nasoya Whipped Mayo, Upton’s Naturals Seitan Bacon, grilled veggies, fresh greens and hot sauce. Plus, some dried mango and queso/beans on the side. Overall, very good, and they catered to gluten-free and raw vegans, as well!

At this point, the conference was over (boo!), but it was time for an after party. We went back to our apartment, ordered up some margaritas from Bar Bar and enjoyed their veggie burger (sans cheese) with shoestring fries. Their drinks are pretty great, and made with fresh citrus, which is a classy touch. For the party, we had a few pizzas from Mississippi Pizza (good vegan options) and carbed oooouuuuutttttt. I had such a good time hanging out with friends new and old, telling stories, laughing, dancing; it was a lot like perfect. 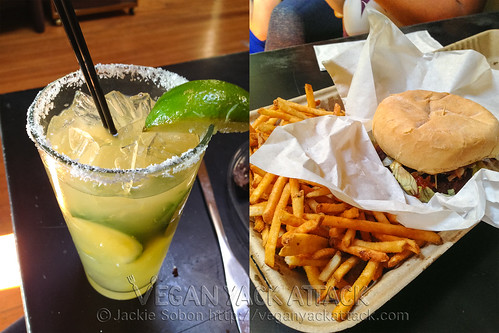 Monday, I slept in and later went to Back to Eden Bakery with Melisser, Kelly and Lou. The two pics are from two different days that I went. The first time I got a Peanut Butter Cookie shake accompanied by a Caesar salad that I ordered for balance. 😀 My second trip there I enjoyed their belly-warming chili with cornbread. 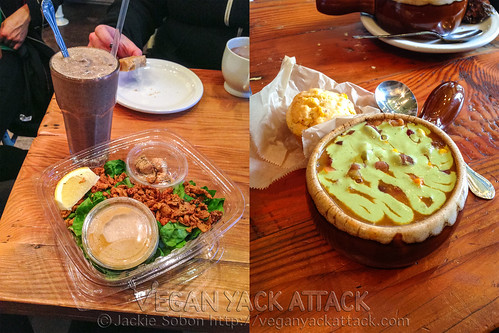 Dinner was had at the Bye and Bye, with the Vegan Cuts team (well, the few that were in PDX) and I ordered the Big Timer (Tofurky Italian Sausage, kraut, coleslaw, mustard, awesome things, etc.) and loved it! But, I’ve always been a fan of Tofurky’s sausages. Their signature drink, “Bye and Bye” made up of peach vodka, peach bourbon, lemon cranberry juice, and soda in a massive Ball Jar is refreshing and not too sweet. I may have had two of those.

Big Timer from the Bye & Bye

Kelly and I made our way to Ground Kontrol to go drink beers and play arcade games, simultaneously. Say what? Yeah, bar/food/arcade games in one place. We happened to show up on Metal Monday which was pretty cool, plus Lost Boys was playing on their projector. Bringing back memories! To end my Vegan Tour de Portland, we ate some late-night bread sticks and pizza at Sizzle Pie (sorry that I don’t have a picture) joined by Jared (who is really awesome). There, I talked with a middle-aged gentleman about living off of the grid, and corrupt government. 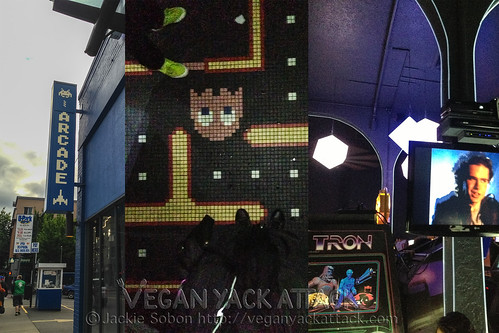 […] Jackie and I both attended Vida Vegan Con 2013, we did not have the good fortune of meeting and stuffing our faces with vegan treats together […]