I have for you the last installment in my recap of the Vida Vegan Blogger Conference 2013. The part where I talk about all of the amazing people I encountered, how I felt/feel now that it’s over and maybe some karaoke pictures.

I have to say, that I was a pretty terrible blogger in that I didn’t take many pictures while I was there. Sure, I took plenty photos of food, but I became enveloped by great conversations and didn’t bother taking group pictures (dammit!). BUT, other people were totally on it, so I have a few to share.

To start, I stayed with some amazing bloggers/cookbook writers: Kelly Peloza, Joni Marie Newman, Michelle Johnson, and Louzilla. I spent almost an entire week with these ladies and had a great time, so I have to thank them for that!

When Thursday came around, it was time to check out some restaurants and stores before we made our way over to the meet and greet at White Owl Social Club. We were eating at Hungry Tiger Too when I first met Joanna. To put it bluntly, I love her. She has an outgoing personality and is unapologetic about being herself, which I can relate to; plus she gives really good hugs.

Then, it was time for the Meet & Greet, which I described before as making me nervous and probably a little awkward. After drinking a delicious coffee stout, I saw Erin and her husband Jeff of Olives for Dinner, we made eye contact and then there was the standard, “Erin, right?” followed up with, “Yes! And you’re Jackie?” and it was all downhill uphill from there. Kristy and Chris from Keepin’ It Kind (who I’ve met before) joined in on the conversation, which was very cool, but I had to leave the couples to themselves soon afterward (potty break!).

Me, Erin and Jeff! Photo by Bianca Phillips

Friday was when I really got anxious. You mean to say that there will be 300 bloggers in one room and I probably have corresponded with half of them online at one time or another? Oh, and now I have to meet them? AHH! I don’t know why I get so dorky about these things, but it was a little hard to go out of my way to introduce myself to the people who I recognized, right off the bat.

Main Hall of the Conference

But, a couple of the first bloggers that I did see that morning were Carrie and Christy, yay! Then when my “roommates” and I went to Veggie Grill, I met JL in person, who totally rules and I wish that I got to talk to her more, plus Jared, who I am also enamored with. After that, it was time for classes! And really, that’s when I met the most people. Once I had been to a couple, and when I wasn’t confused as to where I was going, it got easier and easier to say hi to people beside me and meet new (to me) bloggers. In fact, that’s how I met Ty the Camera Phone Vegan; she’s a sweetheart.  I spoke briefly with a few other bloggers, and when night fell I attended that super-star dinner that I spoke so fondly of, at Blossoming Lotus.

Skip to Saturday afternoon, when I sat next to Bianca Phillips for the Finding Balance class. I wish that I could have spoke with her more, luckily I was able to find a seat next to her for Terry’s Recipe class the next morning. That night was the Galarama, where I spoke with Jill Nussinow about living in different cities, which was fun. Took a photo with Christy and proceeded to spend a majority of my night hanging out with Erin, Jeff and Kristina (Spabettie). We got into an involved discussion over the Strawberry-flavored dental dams that everyone got in their swag bags. HA!

Christy and I! Image Courtesy of Christy 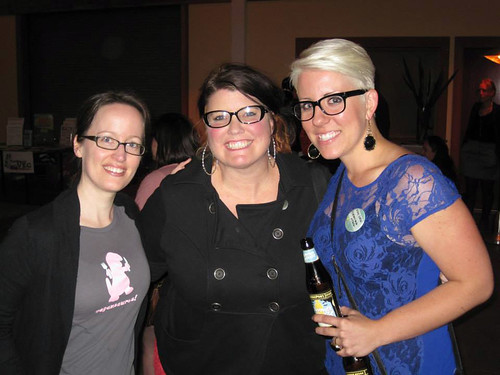 Erin, Joni & I at the Gala! Photo by Erin/Jeff

After the Gala, it was time for karaoke!! This place ended being chock-full o’ vegan bloggers. I got to see Melisser, Ashlee, Isa, Joanna, Ross and many more sing their hearts out. I ended up singing “Total Eclipse of the Heart” which is one of my karaoke jams, and a few back-up singers joined me. I was also lucky enough to meet Amber Shea Crawley and her husband Matt, there! 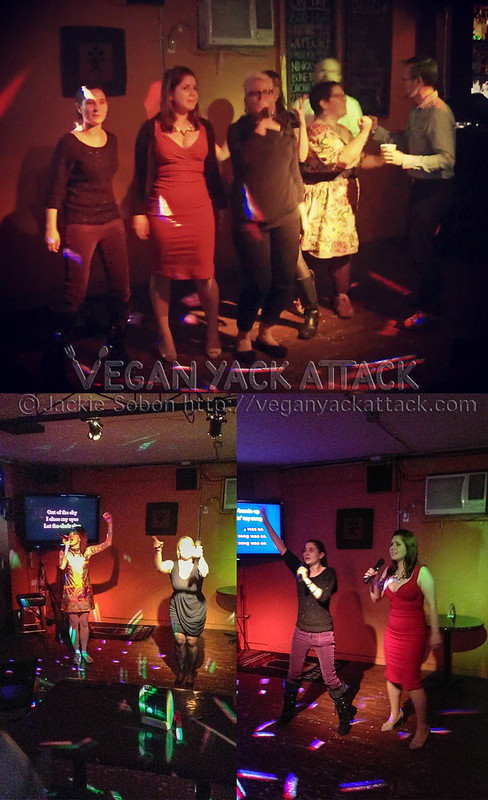 Sunday was a semi-recovery day, but the party didn’t stop. So, maybe Sunday was just a party day? Not important. In my workshop with Isa, I got to learn a bit more about bloggers that I already followed, like Lydia and Mauro of From A to Vegan, plus Angela of the Veracious Vegan (and a few more). I spent my remaining time in the main hall with Erin, Jeff, Cadry & her husband (who are FANTASTIC), Kristy, Chris and Bianca.

From Right to Left: Kristy, Me, Cadry and Erin! Image Courtesy of Erin

Since my roommates decided to throw a last-minute after party at our apartment, things got awesome! Dancing to 80s and 90s Hip Hop/R&B, eating vegan pizza, drinking local brews and chatting the night away. Plus, my dear friend Demetrius was there to hang out for a bit. I met him last year at Expo West and he is one of the best people I know, always looking out for you and wanting the best for your future. I really could go on, but won’t. If I tried to list everyone that I talked to and liked, I would be linking and typing for at least a couple of days!

Once the weekend was over, I had some time to myself to soak everything up and think about what had just happened. It was a totally surreal experience, and I kept telling people that Portland isn’t a “real” city. 😉 My sense of purpose was renewed, my imagination was running rampant, and even though I was slightly overwhelmed, I felt surrounded is positivity. This conference was a place for everyone to learn more about blogging, being vegan, sharing your story, and most importantly, yourself.

Let’s just say that I absolutely cannot wait for the next one, and hope that those of you that didn’t make it this time really give it a try! Now that I’m home, I’m going back to my goal list for this year and really going for it. Which means that there will be some awesome stuff coming your way, in the process!

HUGE THANKS are due to the people that made this conference happen. Jess, Janessa and Michelle, you ladies have changed the vegan blogging community and are doing something beautiful.

[…] is an easy-going, fun, creative, and honorable blogger. I was very pleased to meet her in at VVC last year, and as mentioned below, we hung out recently! Her and her husband are freakin’ […]

I love this post! I'm so excited to go next year, but I know I'll be a clumsy bundle of anxiety and social weirdness- glad to see that I'm not the only one!

That looks fantastic! All the good vegan foods! :)

It was such a blast getting to hang out with you again, Jackie. Can't wait to see you and Melissa next month at Randy's book release party! :-)