Sometimes I get certain concepts for recipes in my head and I just can’t shake them (no pun intended). This idea stems from interesting eating habits from my childhood, in that it was very much a thing to be dipping french fries into a thick chocolate shake and it being SO good. I’m pretty sure that there are many of you out there that have also indulged in this fast-food delicacy; but, if you haven’t you should give it a go! Now, there are some pretty significant differences between what I enjoyed in my pre-vegan days and what I’ve created here for you. One being, these fries have a sweet twist and are coated in a delicious cinnamon mixture, then baked (not fried) and the second being that the “shake” is a thick, rich, smoothie made without crazy amounts of cream or fat, and you’re hit with some spice from chili powder and cayenne. POW! A tasty, interesting treat. The flavors were inspired by Mexican Hot Chocolate, because spice + chocolate + cinnamon is straight up heavenly. When you make that combo cold, the heat from the peppers isn’t as intense, but it lingers a little and I absolutely love it. I tested this out when I made this super simple Chocolate Sriracha Ice Cream a couple of years ago. I thought about using sweet potatoes for the fries, but am glad that I went with russet potatoes, otherwise it would have thrown off the balance of savory vs. sweet and we can’t have that now, can we? And, unrelated to this recipe, I received my advance copy of Vegan Bowl Attack! and could have/almost cried. It’s beautiful! I can’t wait for you guys to see this thing, and you still have time to preorder it with price guarantee (aka super cheap) through Amazon. <3 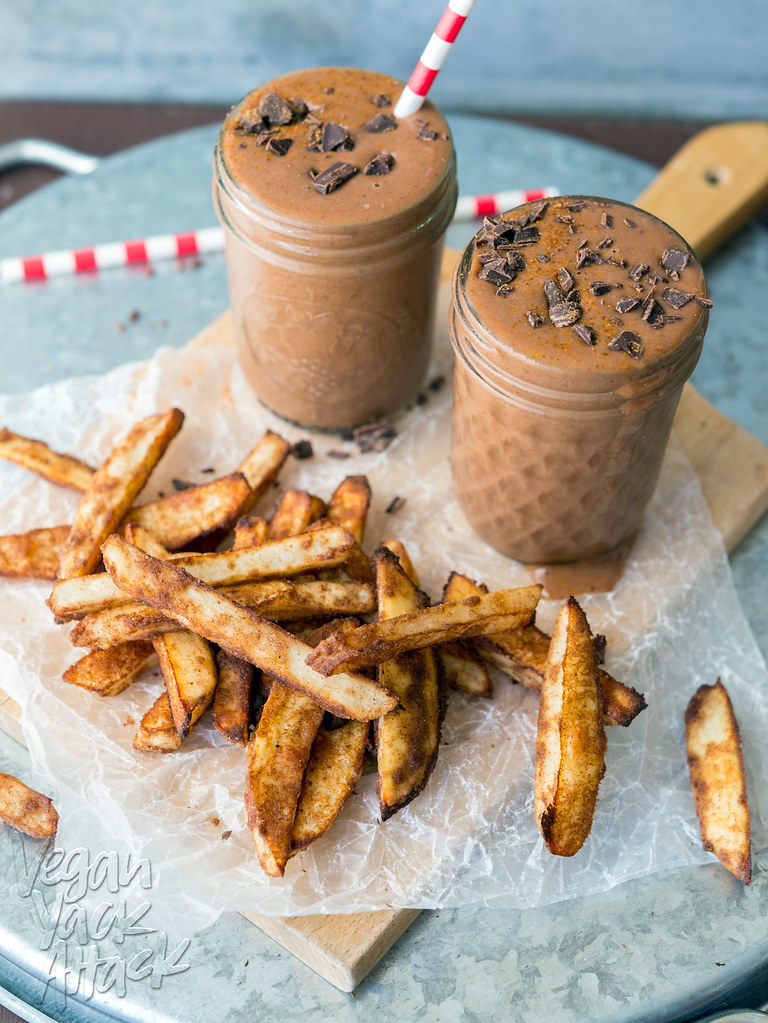 Now, whip up this treat and enjoy the rest of your weekend! <3