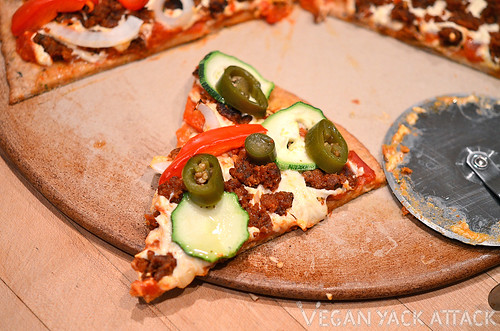 I was finally able to have a vegan pizza night with my non-vegan boyfriend, and it turned out great! I tried out an interesting and new way (to me) to prepare homemade seitan sausage crumbles, and we both like it A LOT. This pizza was made with a few different components, but mostly recipes that I’ve used before; such as: the Whole Wheat Pizza Crust, and a half recipe for the tomato sauce base. 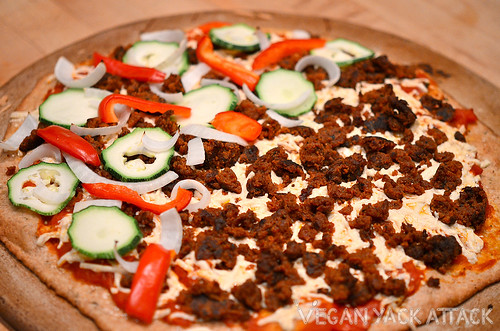 As for the Seitan Sausage crumbles, I based my recipe off of one from Veggies on the Counter and halved it. Because I was rushing, I messed up the recipe, but it ended up working out even better than I had planned!

– Mix all dry ingredients in one large bowl until even combined with no chunks. Place all liquid ingredients into a bowl and stir together. Add the wet mixture to the dry one and combine until the liquid is evenly distributed.

– The mixture is going to be a little watery, and look more like a chunky, pourable batter than a ball of dough. Take this mixture and place in a sauce pan that is on medium heat. Let the seitan sit for about 5 minutes on one side so that it starts to crisp, then turn it over and do the same. Do this two to three more times (roughly 15-20 minutes), but start breaking the “patty” up into small chunks while it’s cooking. 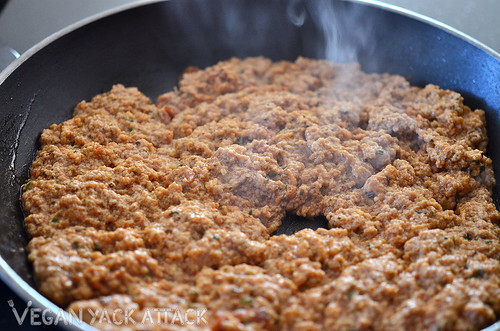 – Do not cook it until it is to the “right” texture for you, if you’re going to put it on pizza. Cook it until it is a little under-done so that it doesn’t burn in the oven. You can use these lil’ sausage crumbles in any dish that calls for meat, or to top pizzas like I did; either way it’s delish. 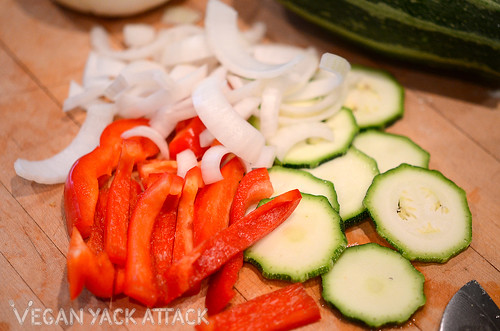 Here’s a picture to show you that this pizza was SERIOUSLY good! 😉 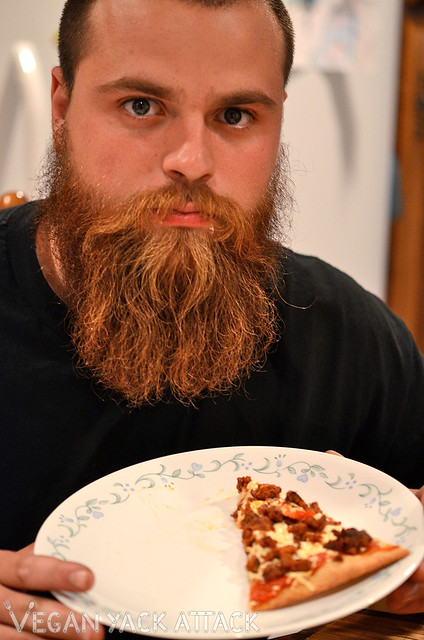 [...] pizza made in an nontraditional way. If pineapple and BBQ sauce aren’t your thing, try out a Seitan Sausage Crumble pizza; or a Rustic Flatbread made with zucchini and arugula (perfect for summer!). Say you’re [...]

[...] I hope that yours has been great so far! Today we have Janna back with us, as she has created my seitan sausage crumbles. Here’s how she went about making them: I never follow a recipe exactly, but the “sausage” [...]

[...] Gimme Lean’s Ground Sausage. I wasn’t sure what to expect, because I have made my own seitan sausage crumbles before and I didn’t know what the texture of this would be like. When you first open up the [...]