Rich, comforting gravy on top of fluffy, flaky, buttery vegan biscuits? You got it! This recipe for vegan biscuits and gravy will become a staple in your brunch menu, for many mornings to come.

Growing up, my parents were not what you would call “cooks”. I won’t knock my upbringing, but I ate a lot of freezer meals, hamburger helper, rice-a-roni, and canned vegetables. But, one thing my mom occasionally made was biscuits and gravy. And y’all, it was a THING. So much so that it’s what she makes for every father’s day or birthday. 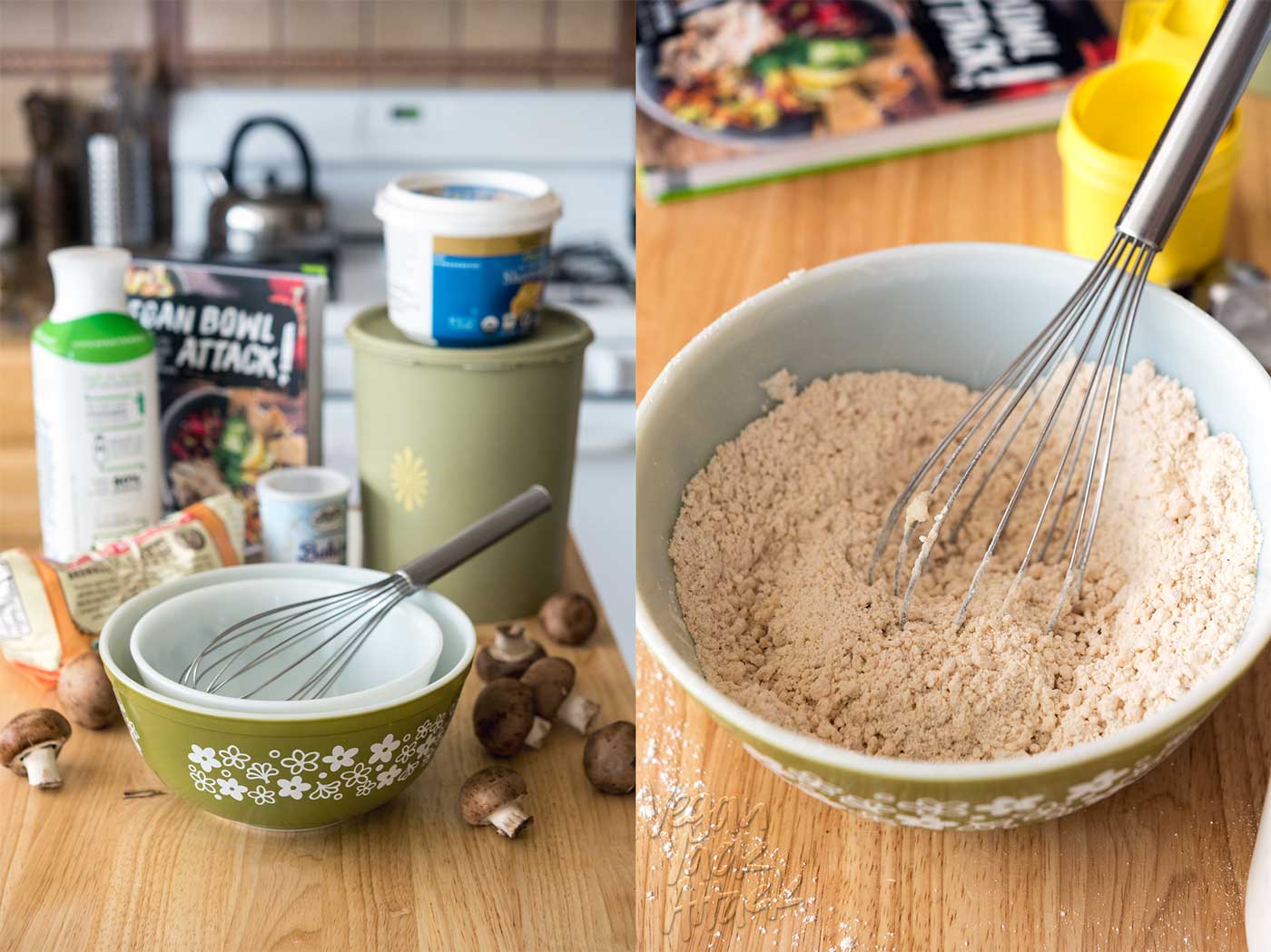 Now, were these vegan biscuits and gravy? Most definitely NOT. My mom’s family is from Tennessee, so the gravy was made with sausage, lots of flour and evaporated milk, and LOTS of black pepper. While my gravy is not as decadent as the aforementioned version, it still has tons of flavor. Plus, it still brings comfort in the way only a solid plate of biscuits and gravy can. 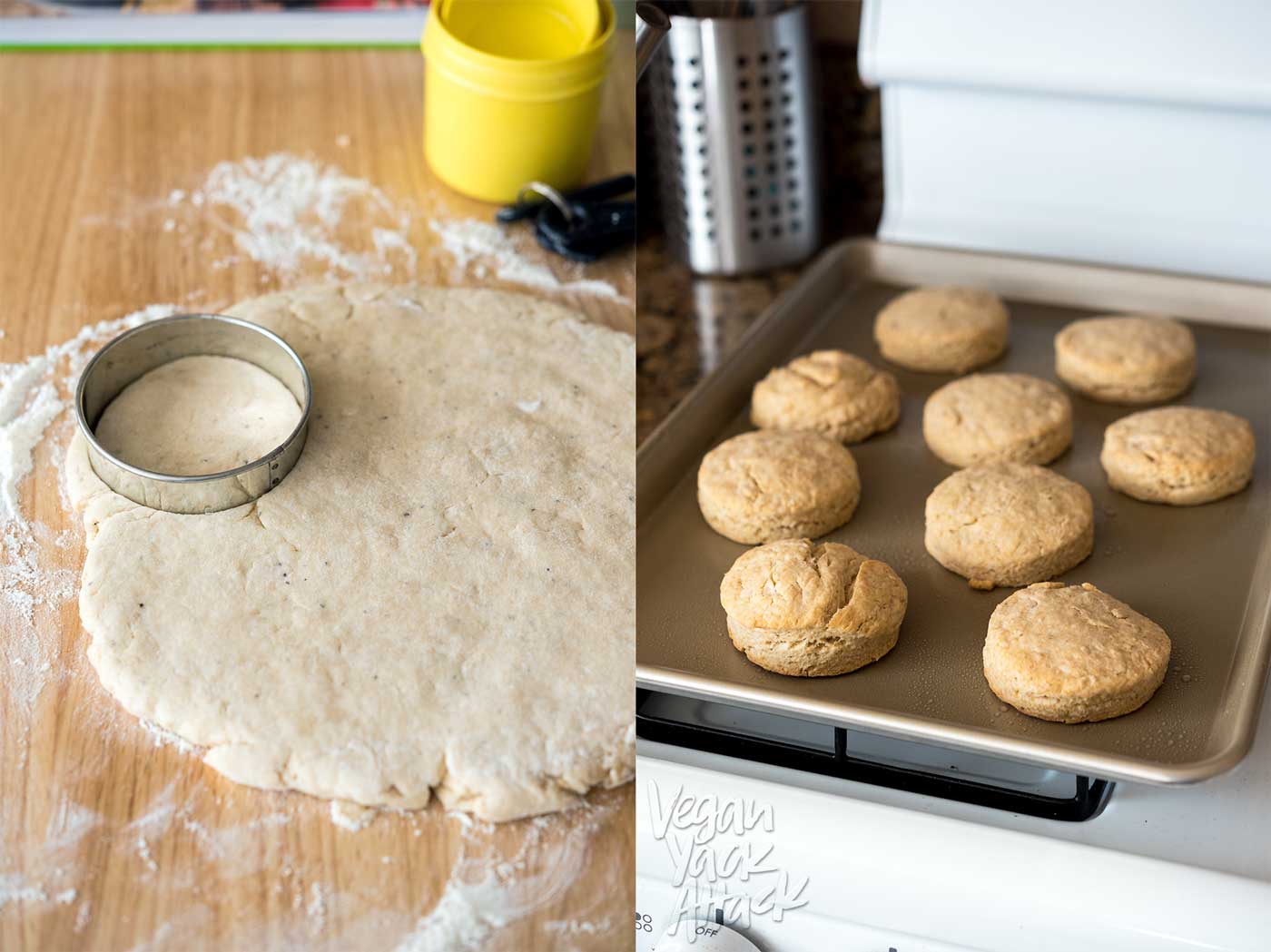 One thing my mom did take a shortcut on was the biscuits. Do I blame her? Absolutely not! Canned biscuits work great when there are mouths to feed and you’re on a time crunch. But, you’d be surprised at how easy it is to make biscuits from scratch. The recipe used here is from my first book, Vegan Bowl Attack!, pictured below – (sans a couple of spices) and it’s the one I make whenever I need the perfect biscuit. They’re super flaky and split wonderfully for that great gravy coverage.

Instead of sausage in the gravy, I used minced mushrooms, for their meaty flavor. One tip I would suggest, is if you want a whiter gravy scoop out most of the “gills” of the mushrooms, as they’re what darken it to a brown color. If that doesn’t matter to you, make as the recipe states and it’ll look like mine! Either way, it’ll taste reeeeeal good. 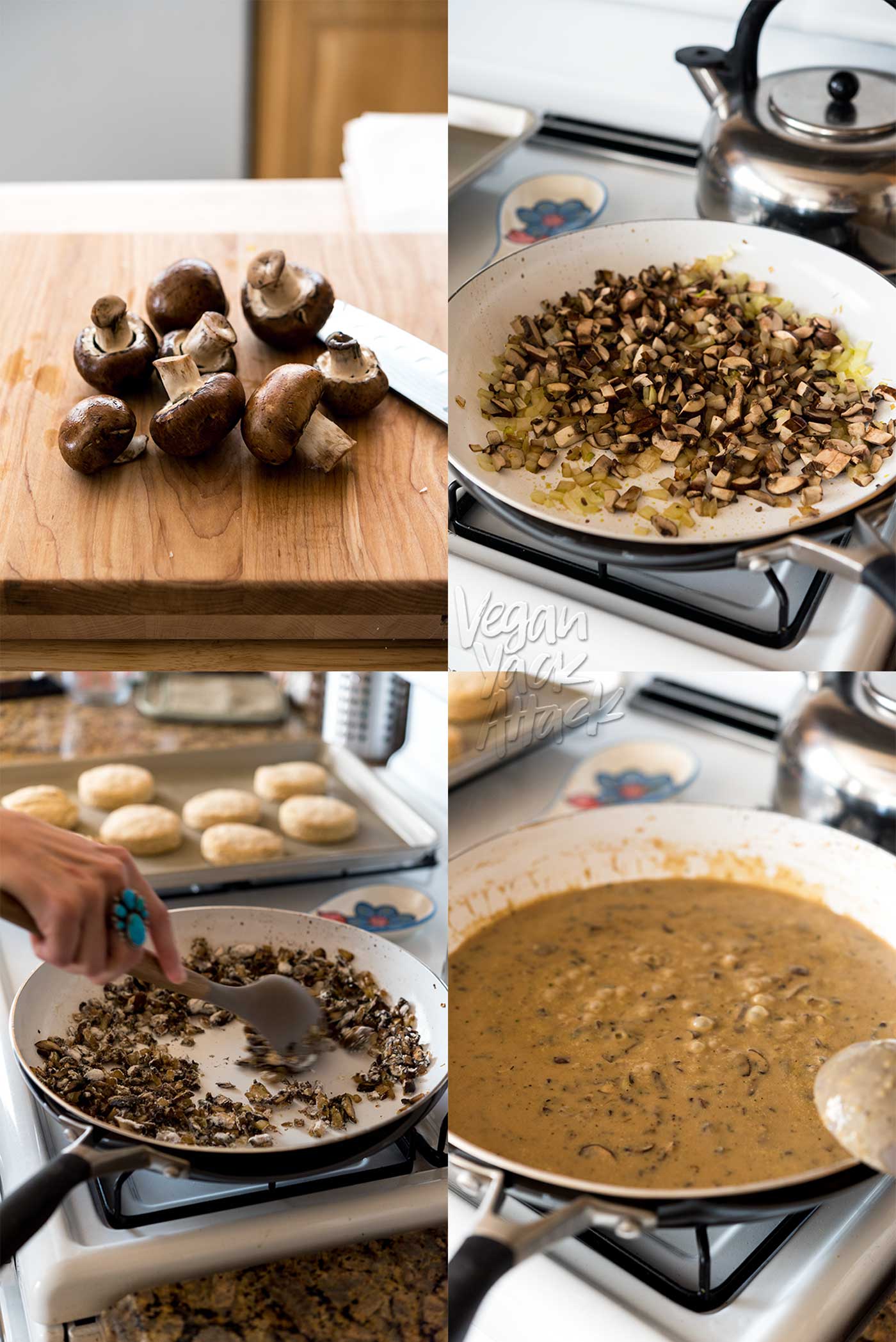 Lastly, I served these vegan biscuits and gravy up for my friend Jennifer and I, and she had mentioned wanting some potatoes. I’m not one to turn down starchy breakfast foods (clearly) so I threw some diced red potatoes in my air fryer basket, sprayed them with a little oil, and sprinkled seasonings over them. So EASY! If you’re interested in a recipe like that, let me know in the comments! 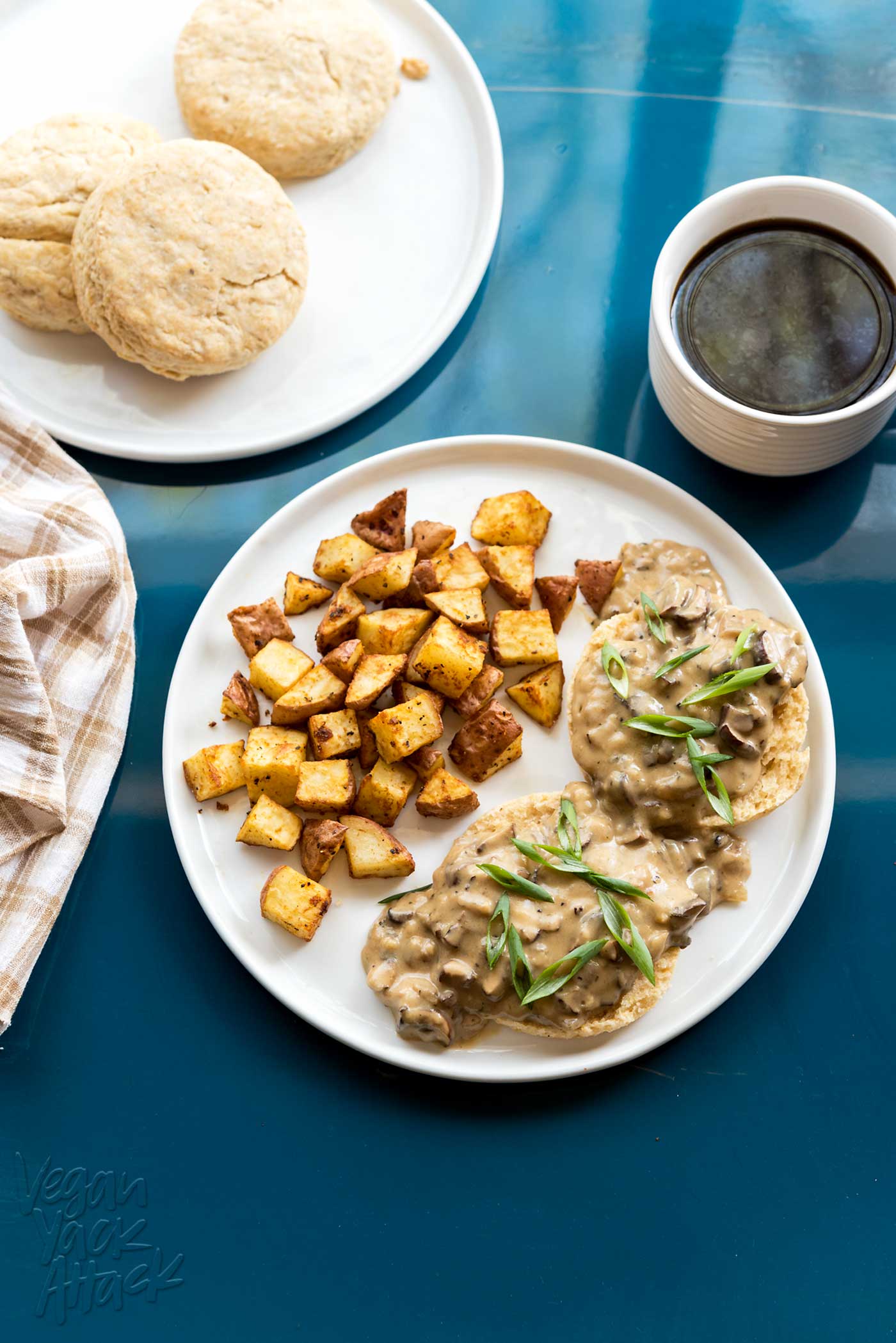 Oh! I almost forgot. The beautiful Sea Blue background I used for the photos is actually an awesome cart that Corey’s uncle made for me. You can check out his other builds/projects on his instagram. Now, have a great day and stay tuned for a cool post coming at you later this week! 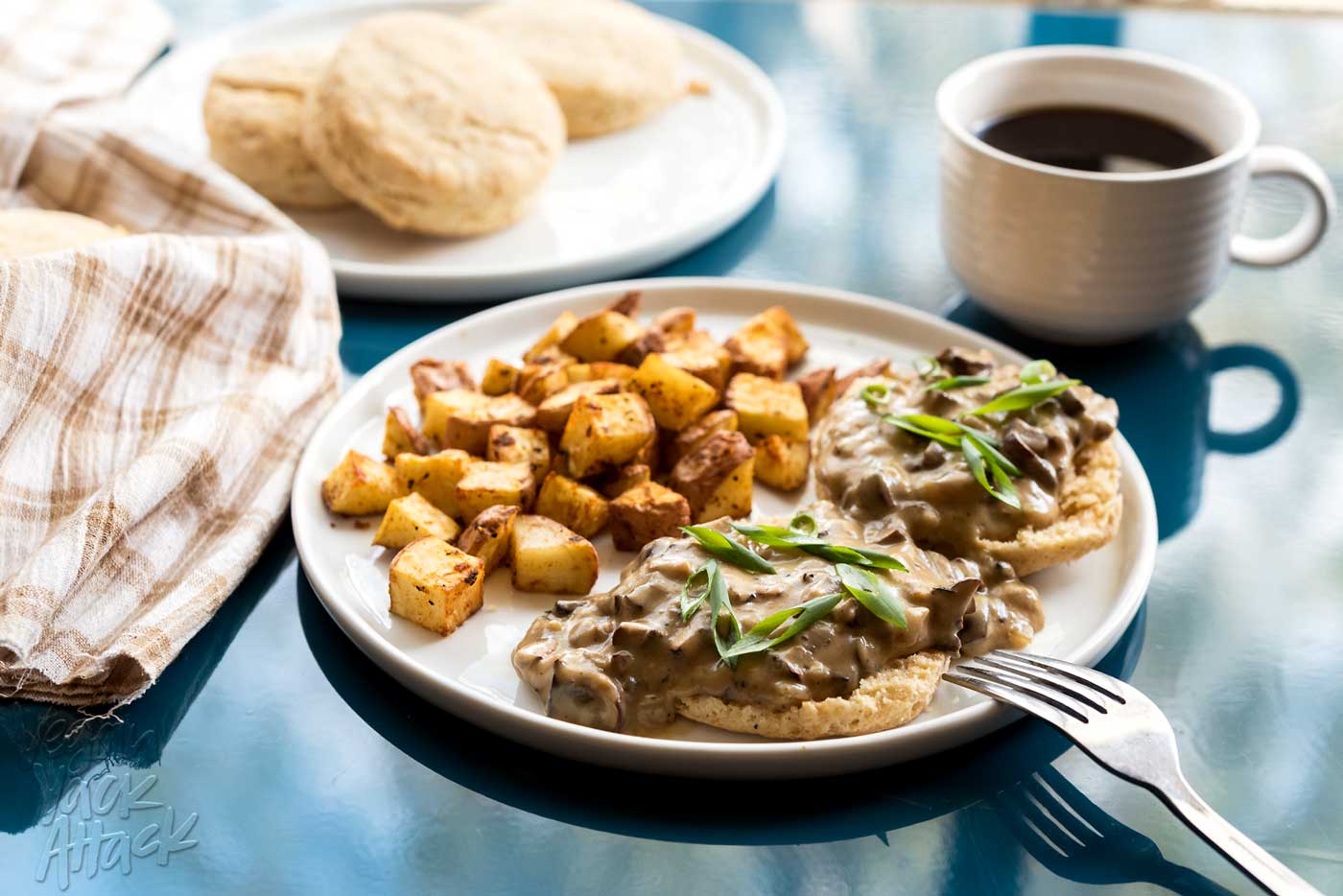 17 Comments on “Vegan Biscuits and Gravy”